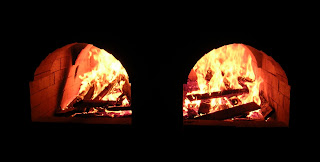 The ART of EARTH
Official World Premiere of a new Film by
TIMOTHY RYAN POE
Starring: Dan Finnegan, as himself!
Saturday, October 29th, 2011. 8pm
The Purina Tower Theater
(be there or be square)
Early this summer Ryan spent a bunch of time filming me as I went through a cycle of making pots through loading and firing my 2 chamber wood burning kiln. He then spent the summer editing and making a little bit of magic. I think he's created an interesting piece,  just 24 minutes long, that gives some great insight into how and why I do what I do.
We are hoping that it will be accepted for the International Glass and Ceramic Film Festival in Montpelier, France this March, but this Saturday will be the the first chance to see it. Popcorn provided!
I will add that I am really pleased with what Ryan has done...he's a soft spoken guy and brought out a quieter side of me which makes it more forthright...I'm not doing my usual dog and pony show. And from time to time I slip and call it 'my film', which it is not. It's Ryan's film about me, which means it's his creative endeavor, not mine. It occurs to me only as I write this that he was the potter, I merely the clay.
And finally, a question: would anyone out there pay a modest amount to see this? Perhaps on a DVD or a pay-perview site. I've been wondering if there was away for Ryan to make a little money for his efforts?
Posted by Dan Finnegan at 7:24 PM

very exciting and I would love to see if but it would have to be a small fee as a potter I have no money these days.Paypal?

I'll bet we could sell a few up here on the Cape, Daniel. Given your entirely unwarranted celebrity up here, I'm guessing there are people who would buy a DVD.
And congratulations.

Well Dan some of us may be more or less modest than others but yes.

I MUST own a copy! DVD would probably be a better way to go. A pay-per-view event would be a costly, one-time deal. DVD's can keep selling over time. (I expect my copy to be autographed!)

I'd love to buy one Dan

Let me know how much the DVD will cost, as I want one for my classes!

I too, am of the modest price category, but would enjoy a DVD. That is a gorgeous poster heading the column.
Cover photo for the DVD?