I'm not certain why I decided I could get this beast loaded in 3 1/2 days. I really need 5 and why is it that we don't load our kilns and then take a couple of days off before firing? With the kind agreement of most of my firing team I am putting off my firing for a day, lighting up Saturday evening rather than Friday. I might have pulled it off as planned but I would have begun the process exhausted from the start. Not a good idea. Still, today's weather was in the top three days of spring, I got the second chamber loaded and I've never had such an interesting and diverse load of pots in this kiln.
Also, have I mentioned that I'm salting both chambers for the first time. Light in the first chamber, heavier in the second.
And the grand prize winner of the mug no one was sure they wanted is...Cindy Shake! Alaska is probaly just far enough away for some! Condolences are in order, my dear, send me your info and I'll send you your prize!
Here's the first chamber, which I loaded second , making it.....I'm too tired to figure it out. 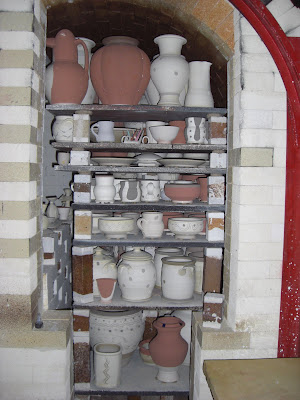 oh- Cindy has the honor of the mug! I will have to pass on my way to honor this beauty.....
The kiln looks great I hope you have perfect weather to fire.

Good luck with the salting, your kiln is huge!

Looks like a good load, Daniel. Hope the weather continues good. It's spectacular on the Cape today.

HOW WONDERFUL!!! THANK YOU so much for the honor of winning the MUG!! It's going in my studio, I'm cleaning off a spot RIGHT NOW for it :o)
xox thanks again

It certainly does take a community to fire such a huge kiln!! Good Luck!!