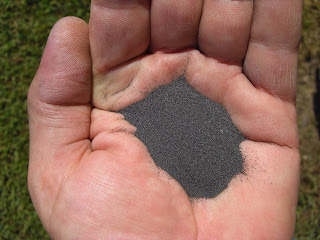 I find myself spending a crazy amount of time testing both glazes and slips. It's always been so and with a new kiln (4 firings) and two different chambers, I have lots to discover. I tried an idea today that has been a long time coming. Too many ideas roll around in my head, sometimes for years, before something clicks and all of a sudden I feel I have to get down to it.
Today's fun was adding raw carbon directly into a shino glaze before dipping pots in it. I measured out about 30 ozs. of wet glaze and then added carbon granules in 1/4 teaspoon increments. I like carbon trapping in glazes, but I'm really not interested in firing a complete kiln on a schedule that encourages it. I was teaching a workshop at Penland while Malcolm Davis and Kent McLaughlin taught a carbon trap class. Their positive results were less than 30% ! I couldn't cope with that. But what if carbon mixed right into a glaze gives a very localized reduction? Do I dare expect little black halos in a field of orange shino? I'm no chemist, but I do love sticking things in a 2400 degree fire to see what happens.
I have a 100lb. sack that I salvaged years ago from a defunct factory that heated carbon and mixed it with oxygen to create a major component of high tech carbon plastics (think Stealth Bomber). If it's a genius idea, I have a lifetime supply. Otherwise....maybe I can sell it on Ebay!
Posted by Dan Finnegan at 10:00 PM

I was just reading an old article about localized reduction using silcon carbide to make copper reds in an electric kiln. Once I find the mesh I need I'm going to experiment with that. I'll be interested to seehow your results come out.

I remember that article and it intrigued me all those years ago...but I never did anything about it. Maybe that was the underlying inspiration for my carbon experiment. Let's swap results.