I will be putting many of the newest birds on sale this Friday at Libertytown. If any of you readers out there are interested you should let me know...last time I sold them all in 24 hours! Beth designed this new extra large banner for the show...we'll use it to announce each firings arrival.
I visited Charles and Ellen  this week south of the city by about 20 minutes. They are planning on building a wood burning kiln and I thought that I could be of help. The only book they had to work from was Rhodes's kiln  book...circa 1950's! I do think I helped a bit. Charles has been building cool things on his property for a long time...gazebos, gardens, towers, a nymphorium(!?) and this gorgeous dovecote. It's not something that we Americans get to see very often. I know them from my days in England. This really is a beauty, although I don't believe that it's ever seen a dove!
I've also been helping a visiting ceramic artist from Cuba who is teaching a course at the University of Mary Washington. They are having trouble firing the old Alpine gas kiln. Another relic of the '50's!
Posted by Dan Finnegan at 8:59 AM 6 comments:

Marie N. has been a steady supporter of this here blog for some time....all the way from Texas! It being pie season, I've ben promising to show her a selection. here are my 3 favorites from the last firing, my dear. The first is a little warmer of a color than appears in the photo. Next will be some teapots for Sara L. in Michigan! 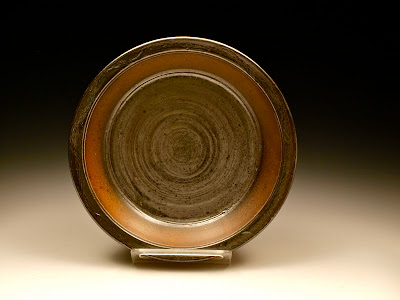 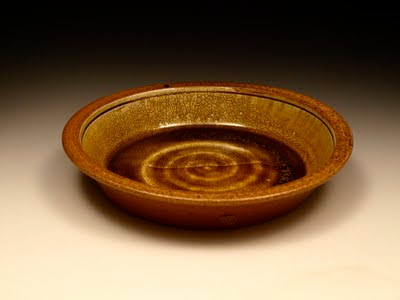 Dee Dee joined us for the big workshop this spring and, using the leftover slips, she is finding her own way with the slip trailer, inspired by the magic that Hannah showed us with hers. Very exciting!
Posted by Dan Finnegan at 5:22 PM 2 comments: 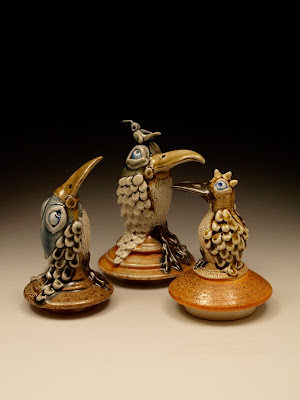 Faithful readers will recall that the pots that these birds sat on had 'issues' so I had one of my better ideas and asked Frank to put his considerable wood turning skills to work. He did a superb job and we are both excited to see if we can push this collaboration further. He used cedar and walnut and myrtle and curly maple. They are fantastic! 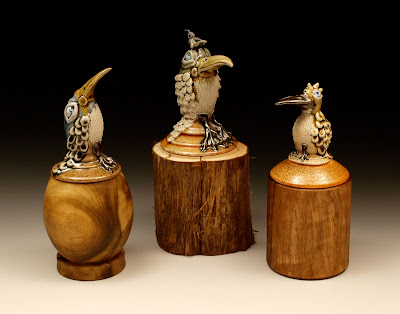 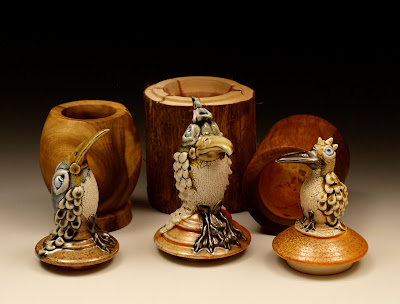 Frank has a beautiful eye for from and I knew that he wouldn't try to do too much. Most of his work has very classic, understated lines. 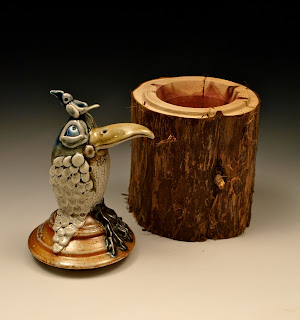 I've noticed that the summer is always slower for the blogging community, but I hope that all these folks taking the summer off do come back. Perhaps it's an overdose of social media? I have my email account, a website and a blog, but I've drawn the line there. I can see how one could be fed up keeping track of twitter and facebook ad nauseum. I'm going to miss those Kline girls!
Posted by Dan Finnegan at 12:44 PM 15 comments:

I had a slip problem on the bases of these three lids but I plan to ask a wood turner friend to make new ones....might be even cooler than clay? They only stand about 4 " high.
This firing was the 'cleanest' to date...fewest seconds ever and the fewest needing refiring. If it will help I stick them in the electric kiln at LibertyTown and give them a bit more heat.
My last posting was mostly small tea jar sized pots. The rest of these get bigger and more elaborate.
Most of the birds get the crackle slip/ ash glaze treatment but these nutty rich brown ones are all kaolin and cobalt slips. They are a pain to photograph.
These next two are so fat and I know that I'll be making more. They completely crack me up! I have to play the Russian stacking dolls trick (matryoshka)...a bird inside of a bird inside of a bird...having done a bird on top of a bird on top of a bird, why wouldn't I?
This bowl and the double headed vase I think of as 'trophy' pots. They're pretty outrageous for a boy who has spent his days making mugs and jugs. I'll figure out a lid for these bowls next time.
I made one of these double headed pots for my last firing and expanded on that idea this time. I made 6 of different sizes and and shapes and surfaces. When I made these two I was afraid that they might not be big enough. Now that they're fired I like them a lot. The others are bigger and quite grand. I sent one off to a show in Texas already. Houston, that is. 18 Hands Gallery. More on that another day.
These two candlesticks are the only ones I made...another avenue to explore!
I'm not sure what to say about this 'bowling ball' except that it is probably my favorite piece from the firing...I think that the form is just right and the glazes are all softened by the salt. Plus he's got a great expression. I'm getting better at that. The early ones were a little static.
This last piece will never make it into my humble photo studio. It's just too big. 4 different slips, all attempts at a blue green, turned out to be shades of blue. Tallest thing I ever made!
Posted by Dan Finnegan at 10:22 PM 11 comments: