With the first day of 95 degree temperatures upon us I am hiding in the A/C and numbing my brain with too much photography/computer time. Here are some of the smaller pieces from the firing. There are still mediums and larges to come!
Of course, you should click on the images to enlarge them. It's one of the few things I can make Blogger do.
Posted by Dan Finnegan at 5:04 PM 14 comments:

Last evening was the lottery drawing for our annual "Patron Show"fundraiser at Libertytown. 53 pieces were donated and 53 tickets were sold at the start of the month. With the help of all our staff and a couple of very young assistants we drew ticket stubs from a pot. That ticket holder then chose any piece in the show that was still available. So beth runs around marking the works that have been chosen and Aline is writing down the list and the proxies are ready, willing and able toIt makes for an exciting evening and with a room full of wonderful work everyone went home a winner! We serve homemade sangria to help folks keep their strength up and I do my best imitation of an emcee. It's always surprising and fascinating to see how different our tastes can be.

An Illustrated Guide to the Birds of Caroline County - part 1

I'm moving on to my photo studio now to record these babies but I always hope that a camera could catch the richness of glazes out in the sunlight. I have close to 40 bird pieces altogether so stay tuned. 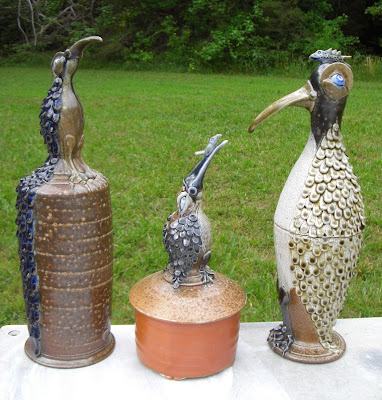 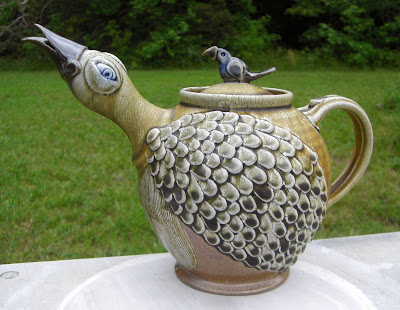 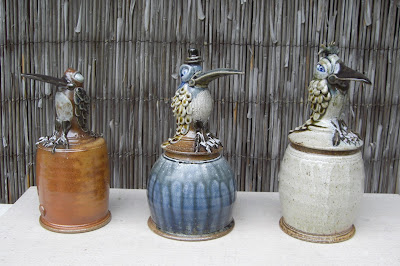 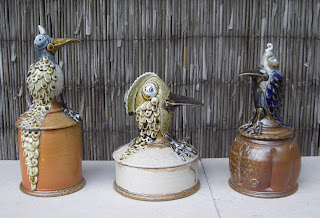 So many things could have been taken as omens these past few days...the license plate I showed you last or the Chinese fortune cookie that lacked a fortune of any kind. It might have been the huge turkey vultures that roosted atop the chimney while I mowed the grass below. It could even been the giant Christian revival that drew more than 500 cars to a farm that I pass to get to my studio (Bob Jones was there...run away.....).
If I actually believed in omens, then I would have had to pick a positive one because the firing turned out very well indeed. Of course perfection isn't the issue, but each of the different areas that I hoped to improve...did! Good heat in the bottom of both chambers and a lot more color (i.e. better reduction) in both and that was achieved by using the active damper rather than the passive. I'm sure that they will both ultimately have a part to play, but I quite deliberately ignored the passive entirely during the first chamber's 20 hours and used it only some during the 2nd. 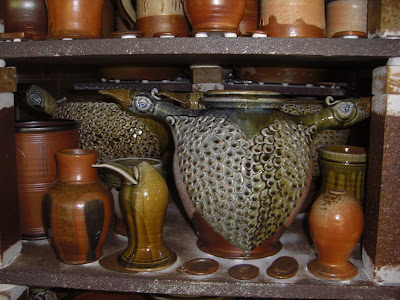 Saturday night I drove out to take out a couple layer of bricks in the arch...dark as could be in the middle of the woods with all the pots tinkling and pinging a sweet song. I sat listening for a while and my thoughts jumped from my own excitement/anticipation to thinking of Ray Finch, and of Michael Cardew, all my friends, and all of the potters in history who have also stood by their too hot kilns, hoping for the best, prepared for the worst and getting it right more often than we rightfully should. Opening up a kiln can mean some questions are answered and new ones raised. Pots can sometimes exceed expectation and others disappoint. 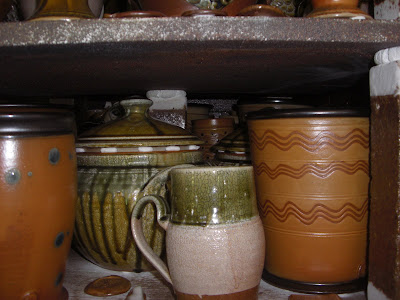 I may have written this down before, but it's one of my favorite stories about my days at Winchcombe. After a particularly successful firing I got bold enough to ask Ray what he thought of the firing and after a customary tug on his meager beard he replied that 'every firing was a disappointment'! I've thought of that for more than 30 years now, knowing just he meant. Unless every pot is beyond improvement (which can never be) there is an almost instant recognition of the pots that fall short no matter the reason. Even during that first peek which gave me a good idea that it was a success I was registering the good and bad. And after a little post firing let down I'll be hard at work to solve another of the puzzle pieces. 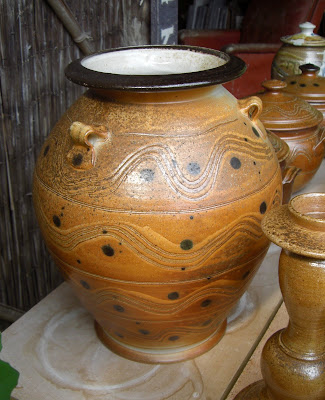 I'm still sorting and rubbing pots down. It takes a while to really see individual pieces and decipher each story. The birds are also amazing but I didn't get good photos . I'll be in my photo studio soon. 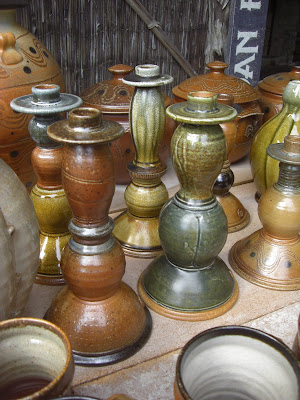 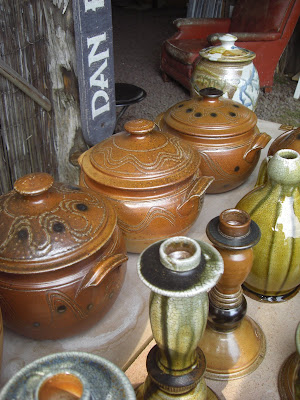 Firing # 10 is complete, but who will be my 200th follower?
The firing was as smooth as it could be and all we can hope for is that the time will pass quickly 'til Sundays' unloading.
I was following this car on the way to the firing. Always looking for favorable signs of good luck. 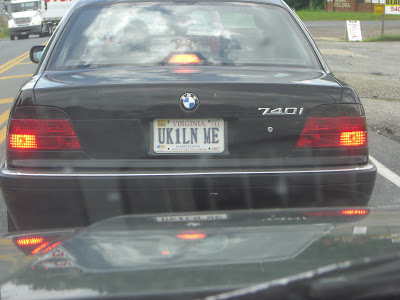 We finished bricking up the doors about 6pm this evening. I have been promising myself that I would not begin this firing already worn out and by moving everything back a day I think I've done it! I will light the fire 24 hours from now and I hope to be at my best.  Jason has the great privilege of doing the overnight shift as he is the newest member of the team. Beth and Michael and Bill, veterans all, will also be on hand. With such good help I can just sit and enjoy the champagne and strawberries and chocolate! 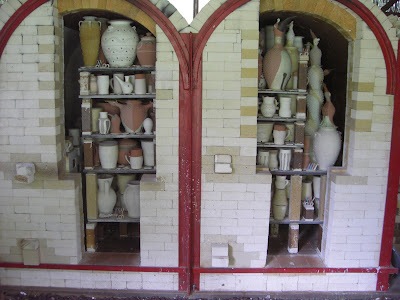 This is the 10th firing and I'm still not finished figuring it out. I still need more heat in the bottom of both chambers, it is always hotter in the back than the front and I need to create a lighter reduction than previously. I'm sorry to use the 'fine tuning' cliche but it is appropriate. 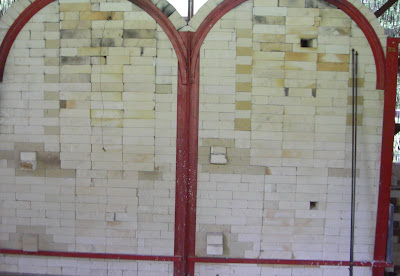 There is also a little film going on that I won't mention much until we see how it goes. I'm hoping for more than ' just another naval gazing wood firing potter' story. We'll see. I'll be back in a couple of days.
Posted by Dan Finnegan at 9:17 AM 7 comments:

Jason here is demonstrating the newest food fad around these parts...tired of cold, day old pizza? Suffer no more, just break out the weed burner and let 'er rip! Another handy lesson learned from the Slipware Kids...

I normally enjoy the 3 dimensional puzzle that loading a kiln presents, but ol' # 10 is wearing me out. I have close to 50 birds of various sizes and shapes and they fit together a lot differently than my functional work. They are also a lot bigger so I'm ignoring some of my standard kiln packing strategies.
It will also change how the kiln fires and I'm optimistic that it will be improved by being more open. There's a lot more 'airspace' around everything. These photos are from yesterday showing the two 12"x24"shelves in the back of each chamber.  I left Jason in town today and came close to finishing the front layer in both. Tomorrow we will put up the doors, do a little preheat and then gather our forces to set a fire alight on Wednesday night. I started making these pots in January...it's been a long road!
The drive into the property has plenty of birds and wildlife to welcome me each day. 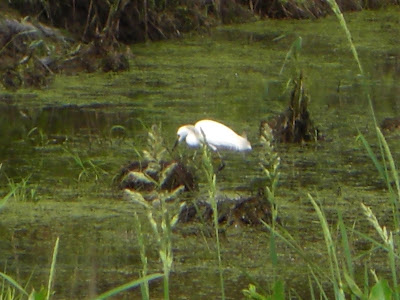 It's a Green World

Our beautiful springtime weather continues, a perfect time to be turning one's mind to packing a kiln and the river of fire that is soon to come. 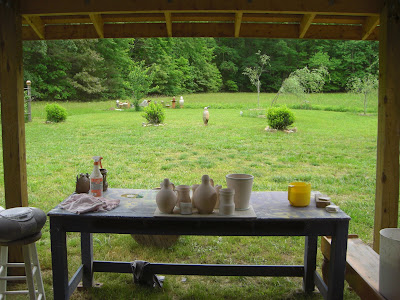 I added a few extra days to my loading schedule to account for bird decorating/glazing...just not nearly enough. I've been waxing, slipping, waxing, glazing and often waxing and glazing again! (What monster have I created?!) So I'm already planning on pushing everything back a day. I don't enjoy the pressure of frantic pottery making anymore. I take my time, getting everything just so, and try to savor the moments. It's made even better by setting up shop under my new shed roof, enjoying the breeze.
It's always hard to stop making pots...years ago it was true when I had a 4 week making cycle and it remains true today when I can take 3-4 months to fill the kiln.
These were the last pots I was able to finish. I wish I could have made lots more of them. 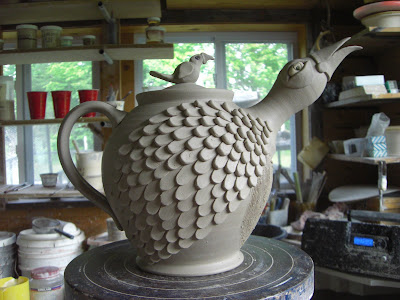 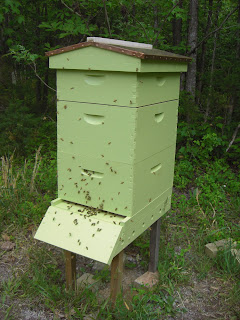 The bees are flourishing! 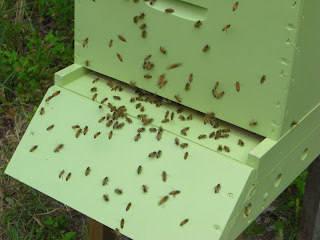 Some of the pots that are waiting to learn their fate.
"Which chamber will he put me in" they ask.
"Do you think he'll over reduce the top again?"
"Am I to be sacrificed at the bagwall?"
All will be revealed in a little more than a week. 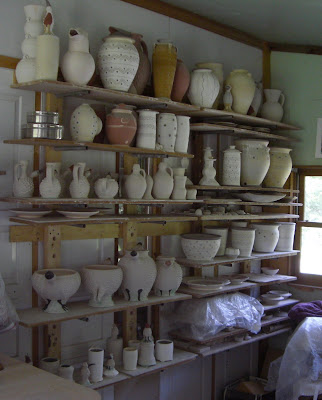 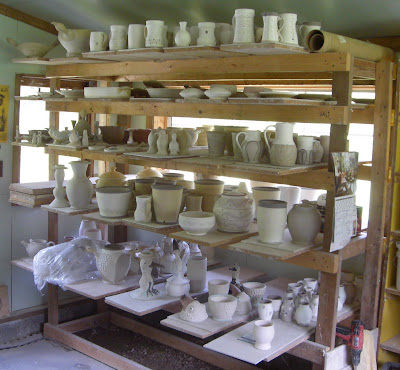