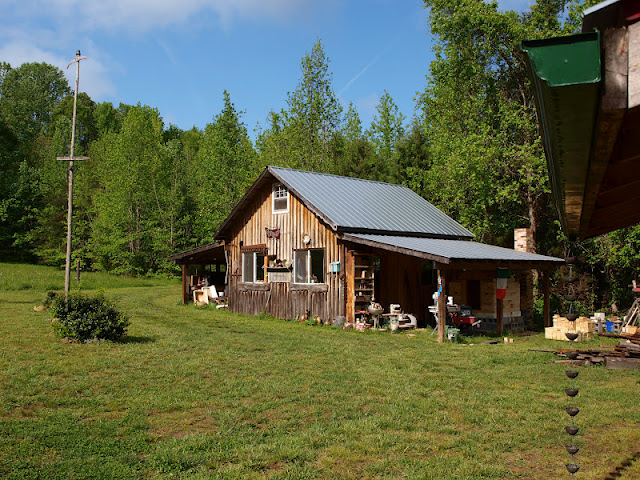 Somehow I had one more photo left in my 1GB of free Picasa storage so here's a little view of another glorious spring day in the Old Dominion! We unloaded the kiln today and it was full of excellent work.

I made lots of changes, both to the kiln itself and to how I fired it, and there is still much to digest, but I feel really good about the results. There are, of course, many questions and maybe I'll find a few answers as I take a further look at them as the week goes by.
I do plan to 'pay the (google) man' for more photo space; it looks like it's $2.99/month and there is a short delay before it's available. I'll show you lots o' pots then. In the meanwhile, allow me to tell my right-hand man, Jason, who missed the unloading (he's out west for a much deserved holiday) that all is well and you got a bunch of sweet pots waiting...and some shelves to grind!
Posted by Dan Finnegan at 9:18 PM 12 comments:

Thanks to everyone who took the time to help me keep at this blog writing thing-y.
I'm heading out to light up the kiln for the 12th time today. As ever, expectations are high and I'm always eager to throw sticks on a fire.
I hope to resume normal activity here next week when everything settles down. I think I'm just going to 'pay the man' for more space. Any other solution requires more of me than I am able or willing to do.
Posted by Dan Finnegan at 10:00 AM 9 comments:

So, Blogger changed everything up (they never asked if I wanted them too) and now I am unable to upload photos...they say that my picasa site if full and I must pay for more space. I didn't even know that I had a picasa site for my photos, let alone that there was a limit. Now they want me to pay them . Does anyone know what's going on? Without photos, I can't see the point of this.
Posted by Dan Finnegan at 8:09 AM 16 comments:

Getting the proper fuel for my wood burning kiln has been a struggle over the past few years. Pine slabs are at the top of the list, but most of them end up in the chipper these days. But Mr Coleman has a yard full and he was happy to deliver it for a very fair price. Happy days are hear again...
Posted by Dan Finnegan at 7:13 PM 5 comments: 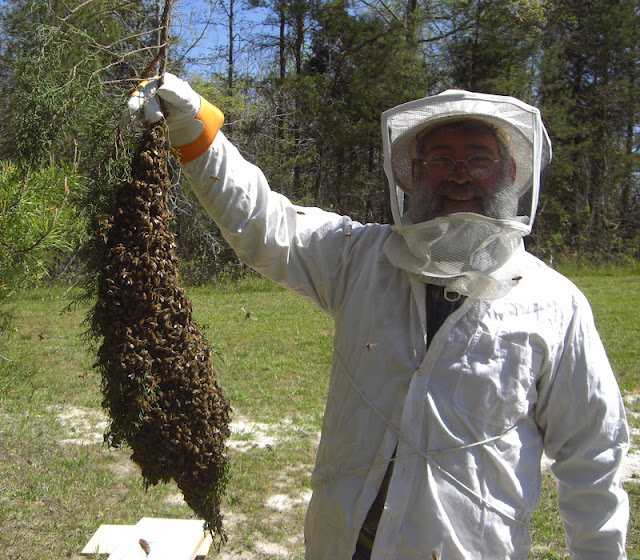 I wrote last week about my attempt (and failure!) to capture a swarm of bees that showed up on the farm by Paul and Emily's house. We were all a little sad that they got away, but it turns out that it was a perfect practice run for the my 2nd attempt in a week. And this time they were my own bees!
Jason and I were talking in my studio when he heard the bees a'buzzin'...real loud. If you play this little video you'll get a good idea of what we heard and saw. It was not normal behavior and we both reckoned that we were watching a swarm begin. And that's exactly what happened. Over the course of 10-15 minutes more and more bees left the hive and the cloud that they formed, swept side to side by the wind, kept growing larger. 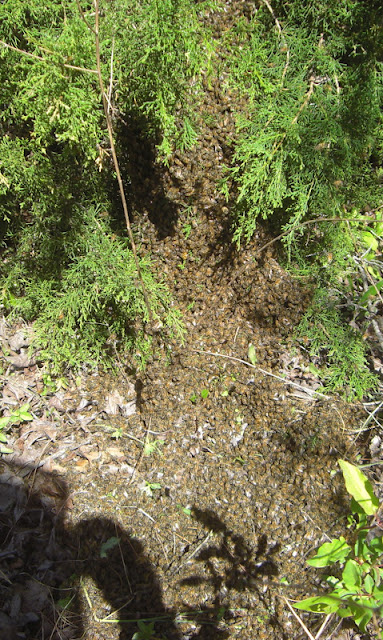 We then noticed that there seemed to be an assemblage of bees gathering at the base of a cedar tree, just 15-20 feet from their original hive. What your seeing above is a river of bees; a big cluster on a low branch that is brought to the ground by their own weight, so the rest of the bees just spilled along the forest floor. At the top of this same photo is the branch that I'm holding in the following photo. 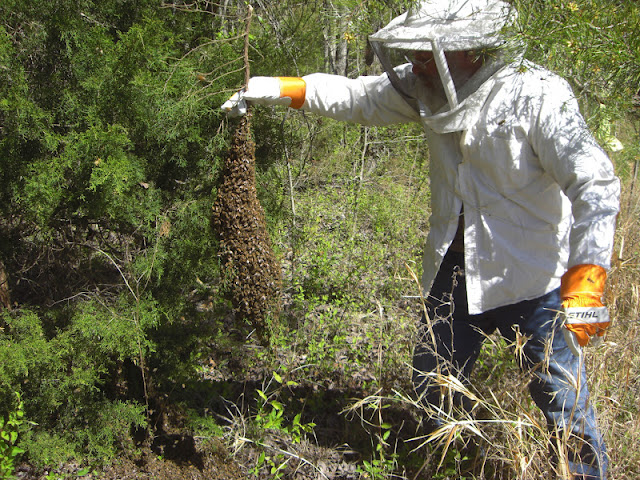 Jason lopped off the limb and I moved it into a new "super" as you see below. We actually cut three or four more branches with smaller clusters, hoping that we got the Queen . There was no way to gather the thousands of bees that were left on the ground, but I was pretty sure that she would be in the middle of the fattest group.
I just gave the branch several hard shakes and most of them dropped right in. That's the first and biggest branch that I'm taking out below. 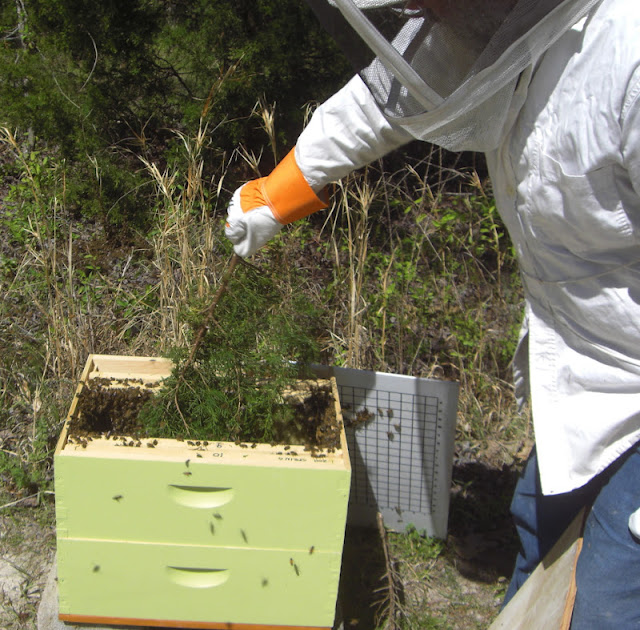 Within minutes (seconds?!) the bees were beginning to build comb on the new frames You can sort of see them below. We then put a cover on top with a small gap for ingress and egress...there were still thousands of bees in the air and on the ground. We watched for a while and I started to worry that we hadn't captured the queen. We took a 20 minute break, went back to look, and just about every bloody bee was in the new box!!! They are extraordinary critters and Jason and I were riding a high all day.
We also checked on the old hive, fearing that it was abandoned, but it was chock-a-block full of bees, honey, larvae and 'queen cups', the funky cells (they look like a peanut in it's shell) that the hive produces only when they need a new one. Did I mention extraordinary?! 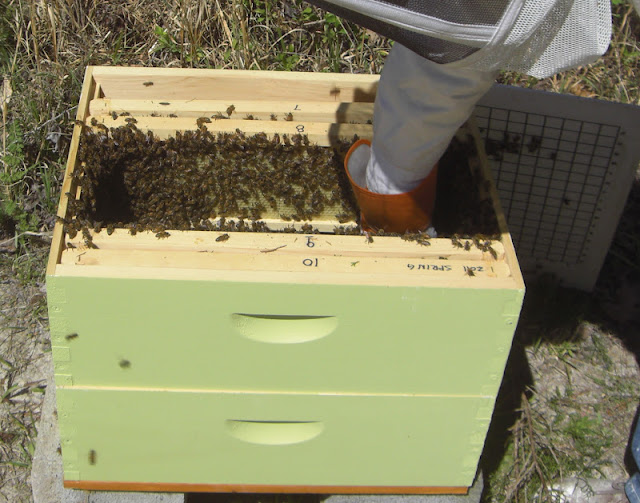 Meanwhile, back in the studio, I'm entering my last week to make pots before the glazing and loading begins. Mugs are everywhere and I only wish I could justify making a hundred more. They were flying off my fingers with ease. 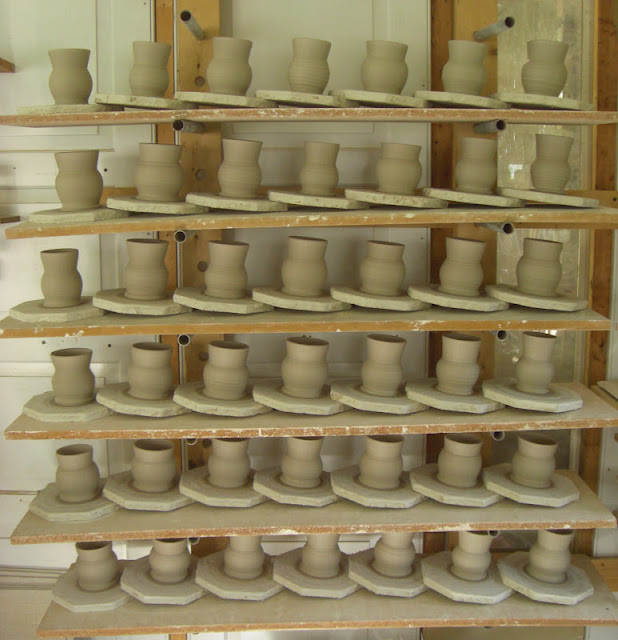 We also cast the second in a series of molds to make these tiles that appear to be book shelves. This is the frame that we use. i very rarely use plaster in my working world, but it does have it's place. I did a lot of sculpture in college using it as a medium in its own right, rather than as a mold to make something else. I would color batches and pour them in layers. 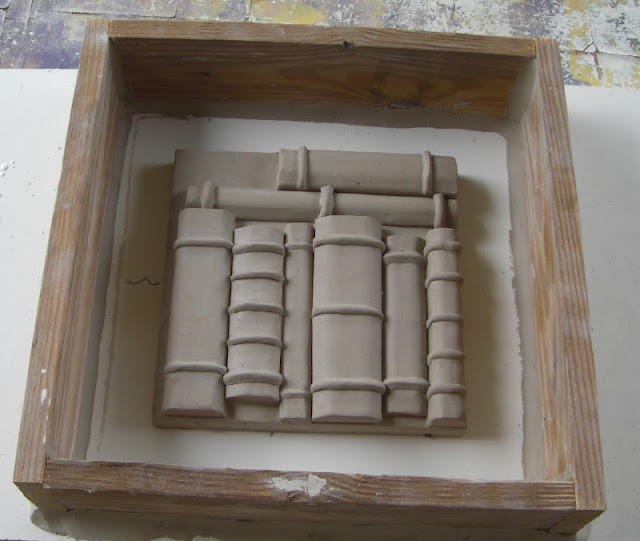 Last, and by no means least, is my newest best friend, Maple. Little sister to Ellie, she is absolutely captivating. I get to hold her a lot and nothing lowers my blood pressure better! 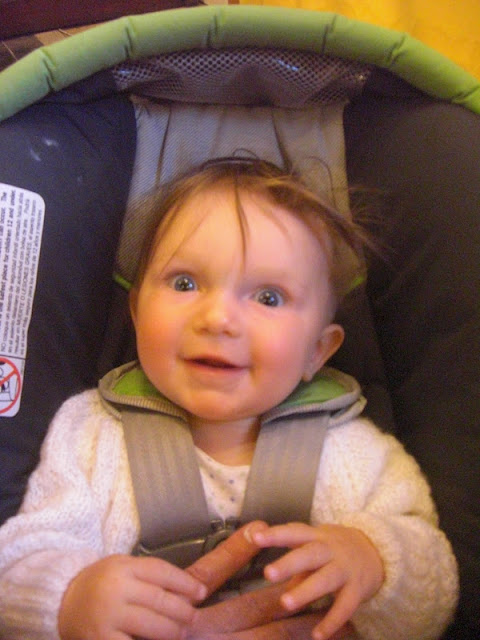 I finished off this little sculpture today...
...and I mowed the grass, slipped and decorated a dozen oval cream jugs and threw 45 small mugs. It was an excellent day.
I sometimes think that the "slow wheel/ soft clay" movement is a bit too precious. I'd love to teach a workshop one day with today's blog title as the theme. I do like my clay to be somewhat firm but I have some extremely stiff clay from Highwater at the moment (I am NOT happy) and I've been waiting TOO long for the promised replacement. Thinking more and more about Laguna B-mix...
Posted by Dan Finnegan at 8:11 AM 8 comments: