Every Firing An Adventure

It took about 6 hours to unload the 100's of pots that filled the two chambers. The weather was fine and so was the company. We unloaded in beautiful sunshine and there are too many good pots to take in at once! Of course, there are still great mysteries to be solved and I'll head back tomorrow to start sorting things out.
Posted by Dan Finnegan at 8:56 PM 13 comments:

I'm heading out to the studio to unload the kiln this morning. The firings have become much more manageable and less stressful as I've come to know the character of this machine. I started making pots and birds for this firing in June.  That's a big chunk of time, effort and (hopefully) creative energy tucked inside. My little peek in yesterday looks promising...! 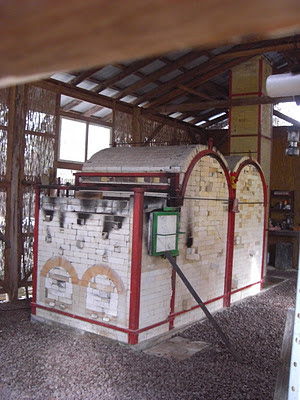 Jason and I have been making tiles and we loaded a bunch along the bagwall to take the brunt of the ash and salt. Should be luscious. 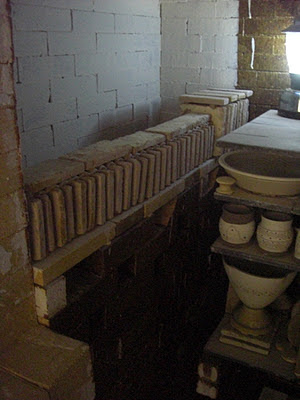 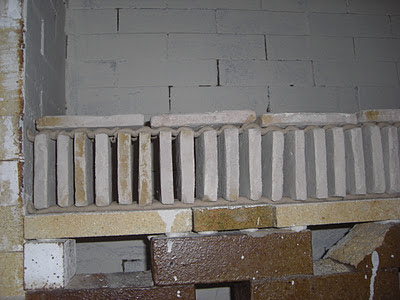 I have great friends who help me out during this marathon...months of making...a week of loading...24 hours of fire. I'm forever grateful for all the support that I get, and I'm here to tell you that I get wonderful support from my friends and community. Jason, Michael and Beth (sorry Beth, no photo) are veterans of many firings now and they work their asses off, smiling all the while.
I'll be back tonight with a full report!
Posted by Dan Finnegan at 8:11 AM 3 comments:

"The Dog Ate My Computer"

The weeks have flown by since I wrote last and life has been action packed!
Lucky for you I've already forgotten half of of it...
I just finished loading the kiln today with a big assist from Jason. (that's 'hot' Jason to you wee lasses from Scotland!) We will light up firing #11 Monday evening for the customary 24 hour burn.
It feels like it has taken forever to get to this point. I'm the guy who thought he might get 2!!! firings in before the year is out. Instead, I'm lucky to get this one in. But that's my life in a nutshell...set out to do way too much, work like mad to get it all done, fall short in the end but still accomplish plenty. I can't help myself. 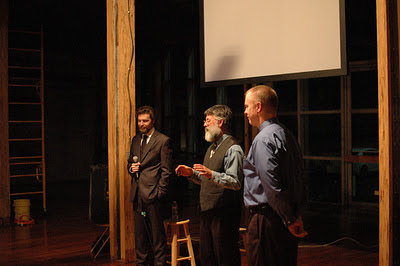 I last wrote about the movie premiere. It was an excellent evening at The Purina Tower building with more than 100 in attendance,  braving the cold and rainy weather to join us. Lots of my favorite people in the 'Burg and plenty of Ryan's friends who were new to me. We had a tasty reception with wine, local beer and mulled cider as well as all kinds of other munchies and, of course, popcorn!
After the  reception we showed the film (23 minutes short) and then had a Q & A with Bill Harris as our emcee.  I think the film was enjoyed by most(?!) and we had a great conversation about film making and pot making. Now we are waiting to hear if it gets accepted to the International Glass and Ceramic Film Festival in Montpelier, France!
Ryan has decided to produce a DVD and I'll let you know when it is available. 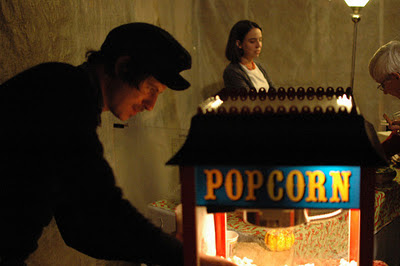 The other highlight of the recent past was the second coming of Hannah McAndrew to our American shores. many of you in the know are aware that Hannah was invited by the Scottish Crafts Council to exhibit at the very prestigious Philadelphia Museum Craft Show. Jason drove up to help her get set up and take along some pieces to make her display look good. I took the train up on Saturday and had a great visit with our favorite red-headed potter blogger who lives in the west of Scotland and makes pots like the Pennsylvania Dutch(! inside joke...ask her to tell you). We wandered all over downtown Philly with the entire contingent of Scots without a single one of them knowing which way was up! It was comical because we got to chat walking along and ended up with nice beer and french fries/chips. 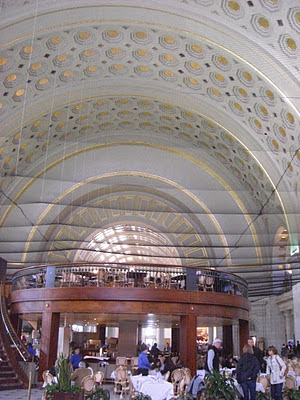 I took crap photos, but the show is full of wonderfully crafted work in every discipline...190 of the best. It one of those shows that I often enter and never will get in. I think that the birds would be a big hit there. I'll let Hannah tell her story, but her work looked great and she is such lovely company, it was a good way to spend my day and a half vacation! We packed her up, had a fine meal in a veggie/asian place and then Jason and I blasted on down the highway. I also enjoyed visiting with Bob Briscoe and Shawn Ireland at the show. Two wonderful potters and really good guys.


Philadelphia has fantastic murals everywhere. A mural tour is part of the tourist attractions! 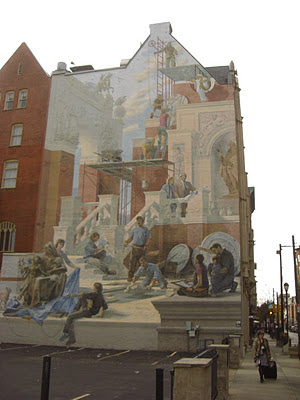 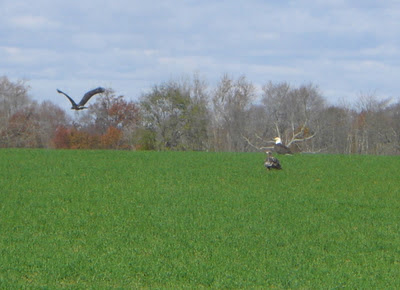 This last photo is hard to see, but still gives me a thrill to look at. As I drove to the studio last week there were 4! Bald Eagles standing in a wheat field just by the road! 2 adults and 2 teens with the youngsters feeding on some carrion. I stopped and watched them for a while. Inspiring!
Posted by Dan Finnegan at 10:12 PM 5 comments: