I posted a photo of a couple of my biblio-birds in progress on my facebook page a few days ago and got comments from both of the Bringle sisters so I figure I must be on to something!
As this is my 500th post, I thought I'd mark it with a little backstory.

I'm not sure what it is that is so satisfying about making these birds...parts of them are downright tedious and I did grow weary of them for a while, but after giving them a rest I've been back at it again. It takes a different state of mind to make them than throwing my 'proper pots' does, and it still feels luxurious to spend so much time on just a few pieces.
I first became aware of the Martin Bros. back in the '70's when I was getting into clay. There was an article in Ceramics Monthly (b/w photos in those days) about the 4 brothers who ran a pottery on the edge of London at the turn of the 20th century. They made an extraordinary range of work including what came to be known as "Wally Birds" after Walter, who was the idea man behind this series of pots called 'tobacco jars' modeled in the form of anthropomorphic birds. They were amazingly expressive and nowadays are highly collectable. They were salt glazed and I must have seen a few photos of them in an early salt glaze book as well.
When I first learned about them it never occured to me that I would ever make anything like them, but they tickled my fancy and then receded to the back of my mind. I would bump into them in a book or auction catalog from time to time and then 8 or 9 years ago I visited a collector in England who owned dozens and dozens of them and I got a real good dose. I still had no idea that I ought to try and make them, but I sure found them intriguing.
And yet, several years ago, on a goofy whim and completely out of the blue, I made one, or at least my version of one. I like to suggest that the final inspiration came from watching my bird feeder while throwing pots, but who knows...a preponderance of intriguing encounters, birds on the brain, asking the 'what if' question, and there you have it...one answered question has led to a whole new body of work. I have always made other things in addition to the tens of thousands of useful pots that have paid the bills all these years. Usually they are much more esoteric...I'm still not sure how to label them.
I see my interpretations as more cartoon-like versions of birds than the fairly realistic Martin Bros. work. And I quickly found other forms to apply to the idea to.
I often work this way...ideas fester and percolate for a long time and are usually rooted in historic work. I then use an idea as a jumping off point, but I'm not interested in reproduction. Whether it's my desire to make work that is appropriate to this day and age, or whether it's my interest in exploring or even my need to leave my mark on things, I find that I am most excited about moving an old idea forward, and at it's root, that is what I think 'tradition' or 'traditional pottery' is all about. Tradition does not mean stasis, and our traditions continue to have value as they evolve.
So, Here's a bunch of photos from the last 2 years. I'll post more soon. 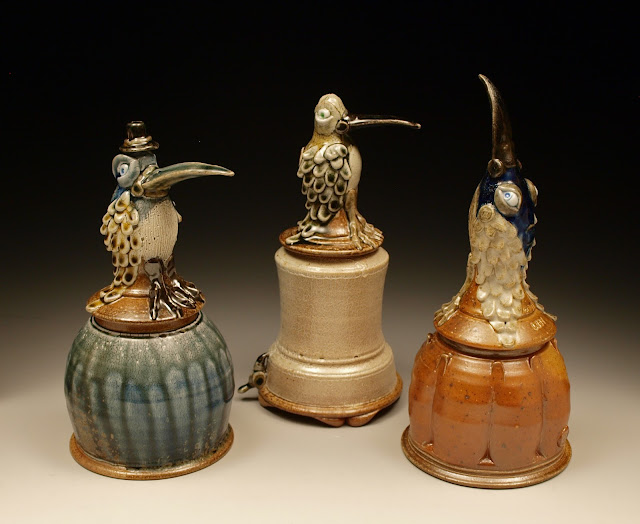 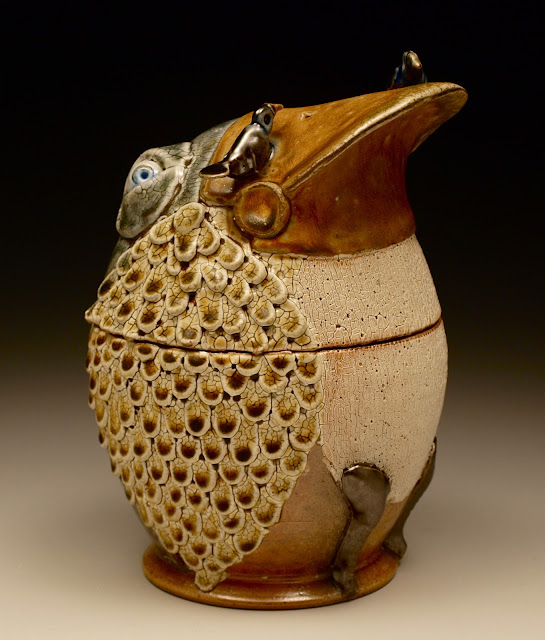 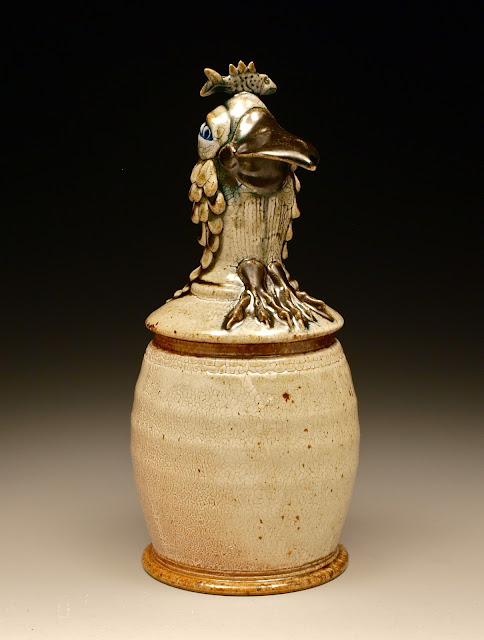 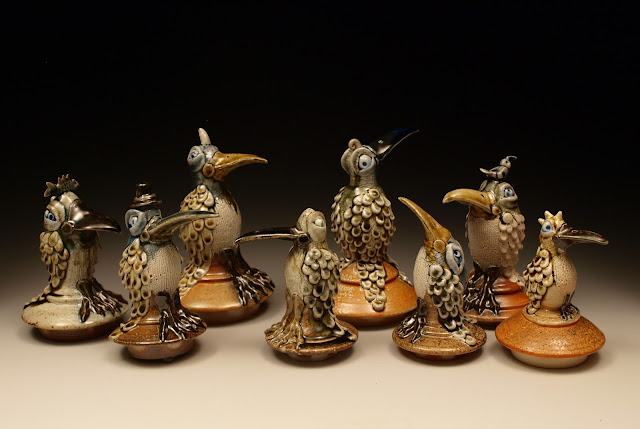 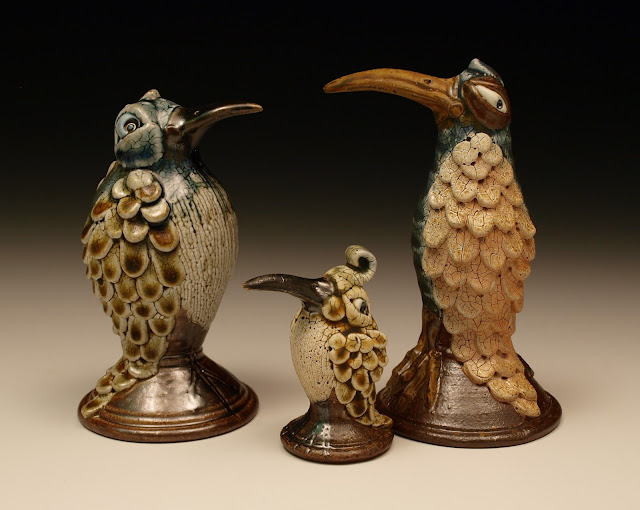 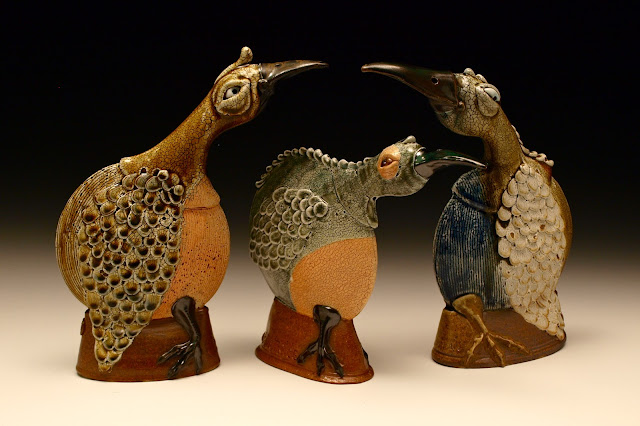 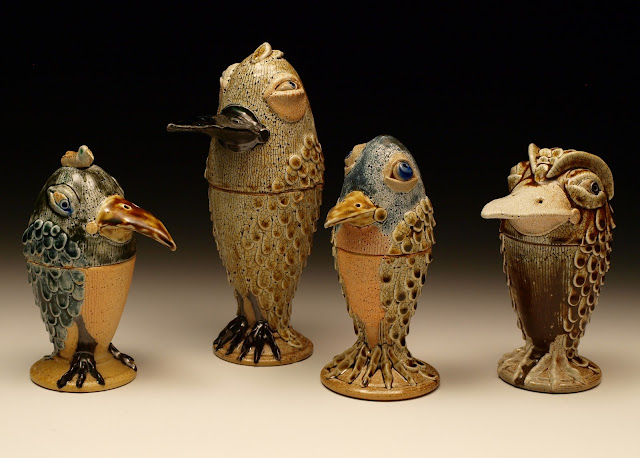 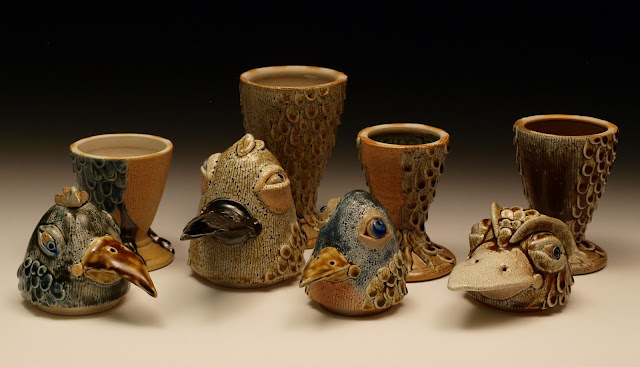 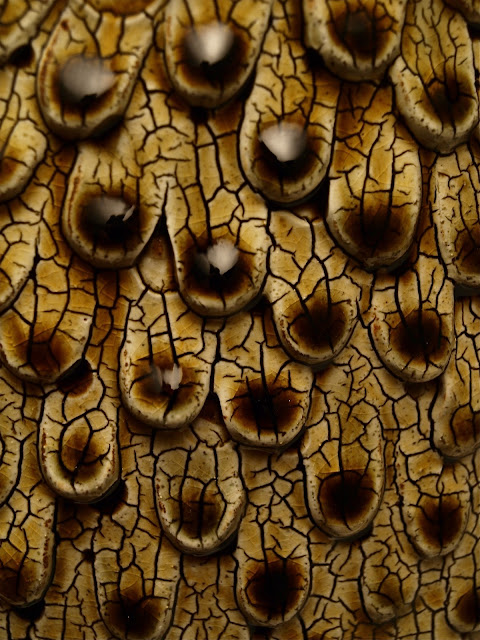 * P.S. "The History of the Byrds" is one of my all time favorite albums...with apologies for lifting the title!
Posted by Dan Finnegan at 9:39 PM 8 comments:

I enjoy reading Tony Clennell's blog...he's a good writer and potter and he wears a good hat well. He also writes as if he is the only man with a handle fetish. Below I submit my own visual confession! I admit when he put handles on the knobs of his teapots a while ago, I was ready to surrender!
I haven't made these lately because everything flat warps in my wood kiln. I'm working on it... 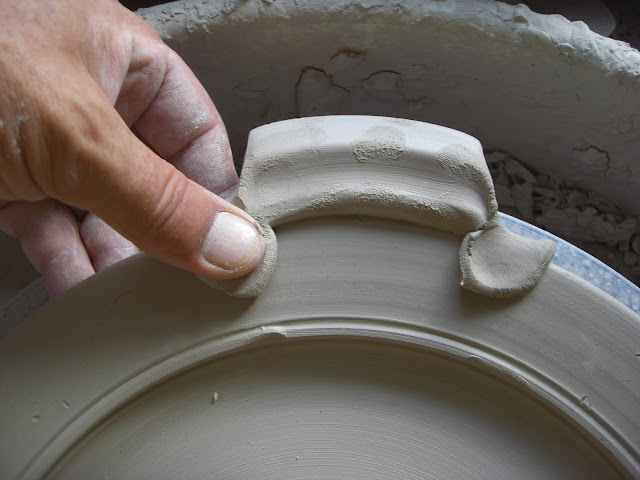 When I was a young lad, just discovering that there was a world where people made a living working with clay, there were very few 'role models' for life outside of Academia.  John Glick was one of the very few that I was aware of back in the 70's and he continues to make wonderful pots with distinctive character today. When I first started writing this blog he contacted me out of the blue to compliment me on my work. That was a big deal for me...and a completely random act of kindness!
I just bought this bowl of his on EBAY and I'm really happy to be able to hold it in my hands and imagine something green in it. I'm on a cabbage kick at the moment.
Other potters that I knew back then: Cynthia Bringle (I took a workshop with her in 1976!), Dave Shaner and Byron Temple. Who else?