Two Sides of the Same Coin

If you've read my last post about my 'Night in the Abbey' (and why wouldn't you?!) you will perhaps be able to make sense of today's title when I tell you that last night I was just as privileged to spend the evening in a shed drinking  cider with my old friend Ken and his cousin Vernon. Vernon is probably one of the last of the 'market gardeners' here in the Vale of Evesham. This fertile valley was home to country folk, usually entire families, who intensively gardened their smallholdings, growing produce that went to market and usually ended up in London or other big cities. Ken tells of driving a horse and dray to Pershore several times a week with fresh runner beans, potatoes, peas...truthfully, any good veg or fruit that would thrive here. Plums and apples, pears and soft fruits also prospered. Nowadays most of the produce is imported from as far away as South America(!) and, while the flavors have been bred out, locals can't compete with the price. It's the age old story that I know too well in America...beautiful to look at, but little taste when eaten.
Anyway, back to our boys' night out. Vernon has a funky old hut out back of his place, dark and dirty, low ceilinged and wonderful. All around are ancient whiskey and rum barrels that are mostly filled with very alcoholic cider made from apples and sometimes pears. Then there are the racing pigeons, the dogs, and vegetables everywhere.
These two men lived a life that I find hard to fathom, sometimes seeming feudal or medieval, but it is another of the great privileges of my life to know and be accepted by these hard working country men. Vernon has always made huge quantities of cider to supplement his income...it used to be that by law he could 'only' make 3,000 gallons...now it is a mere 1,500 gallons. That doesn't mean that there aren't other barrels hidden in nooks and crannies about the property that the taxman doesn't know about! The cider is lethal and they take great joy in getting me completely 'gutted' as they say over here! I think that I must be quite an exotic visitor to this place where people seldom leave the county in their lifetimes, and then it is somewhat reluctantly. 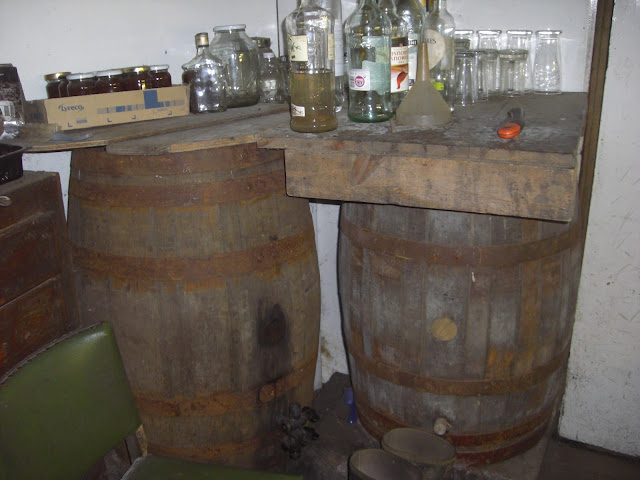 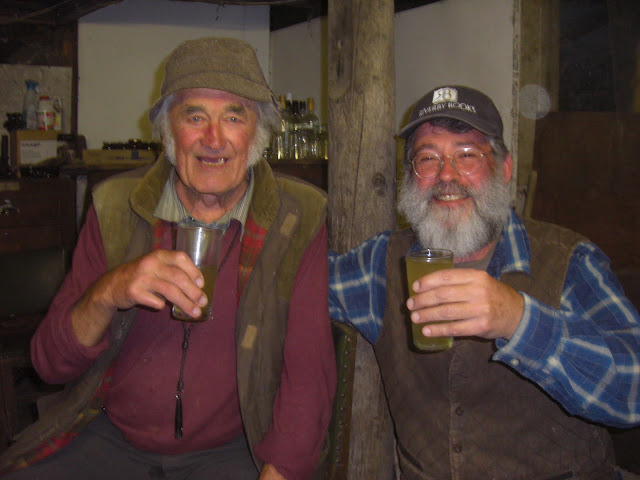 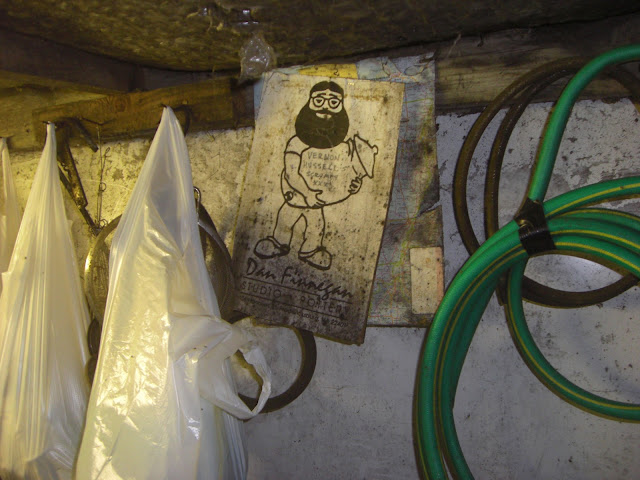 I always ask them about the early days of farming, of life during the war when bombs fell nearby and food was scarce. It is pure pleasure to listen to the music in their voices as they name off the old varieties of plants that they know so well. Sadly, this computer won't let me upload the short films that took...I will revisit this when I get home. The music of the Gloucestershire folks language is fantastic!
Oh, my aching head...
Posted by Dan Finnegan at 10:29 AM

So wonderful. And my but your face has gone a bit red...;)

That's my idea of a good night out.
You seem to be getting a better "taste" of England than
any of us locals ever do.

Any chance of passing on the address? I often venture
in that direction and having the opportunity to return home with 'real' cider would give the journey a real purpose.

Very cool Dan. Wow. What a time that would be.

Old timers have a lot to offer if you slow down and listen.You are lucky to have met these guys.

In the gutter again. Next time you go over the pond, i'm sneaking into your duffle as stowaway. CHeers, bring on the headaches!

That's so cool! We tried to bring some Burrow Hill Cider home. Sadly it went "off" in a very hot Dallas airport on our way home to Durango. Best consumed right away!