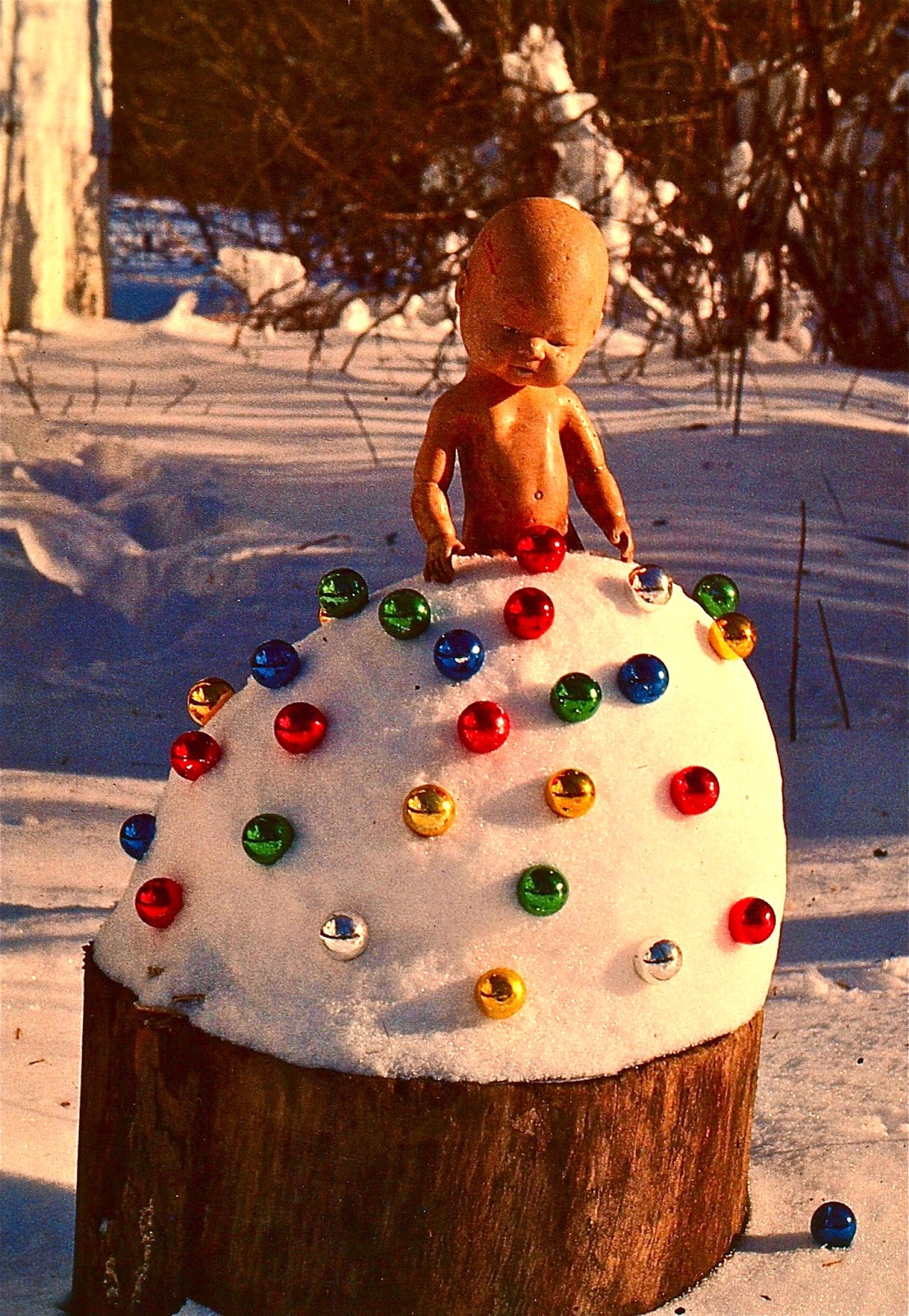 I chose not to fight my way through the snow/sleet/rain today, but I'd really like to be making pots  instead of bouncing around the house. I've spent way too much time at the computer lately and that makes it even harder to keep the ol' blog going.
I mentioned in my last post that I'll soon be moving over to Wordpress as I unveil my new website/social media conglomeration, and it seems like it's just the right time. According to my blogger statistics I got over 1000 hits on my last post...but only 2 comments. Methinks that something untoward might be going on?
I'm spending so much time at the computer as a result of all the opportunities that have come my way this year...the latest is an invitation to the American Pottery Festival in Minnesota in September. I feel like an overnight sensation after a 40 year career! Each of these inviters wants different material for publicity and it's forced me to rewrite a biography and artists statement and update my resume and pick out new photos...and I'm also working with Adam on photos of pots for the "shop" on my new website. So, yes, I'd rather be making pottery. But I am willing to do what it takes. I just worry a bit about getting all the pots made that I need...I won't lack for motivation this year, believe me. The studio is beginning to fill up and I'm really enjoying the work...I have a small one-man show coming up at The Cooley Gallery in Leesburg and then my return to Bob Briscoe's for the St. Croix River Valley Pottery Tour in Minnesota for Mother's Day! That's where most of what I'm making will go. I continue to bounce back and forth between birds and everyday pots and I won't make any more 'furniture' for the garden until I've fired the ones that I made.
I'm playing with a little brushwork decoration which harkens back to my earliest work in Fredericksburg. That was inspired by the delicate decoration of Trudy Finch at Winchcombe. Her brushwork (and mine too, just not as well) was very calligraphic and I'm breaking that down even further at the moment by using a single brush stoke coupled with some sgrafitto, which I've always loved. I'm looking for a lighter background slip and a blue slip for layering on top in different ways. 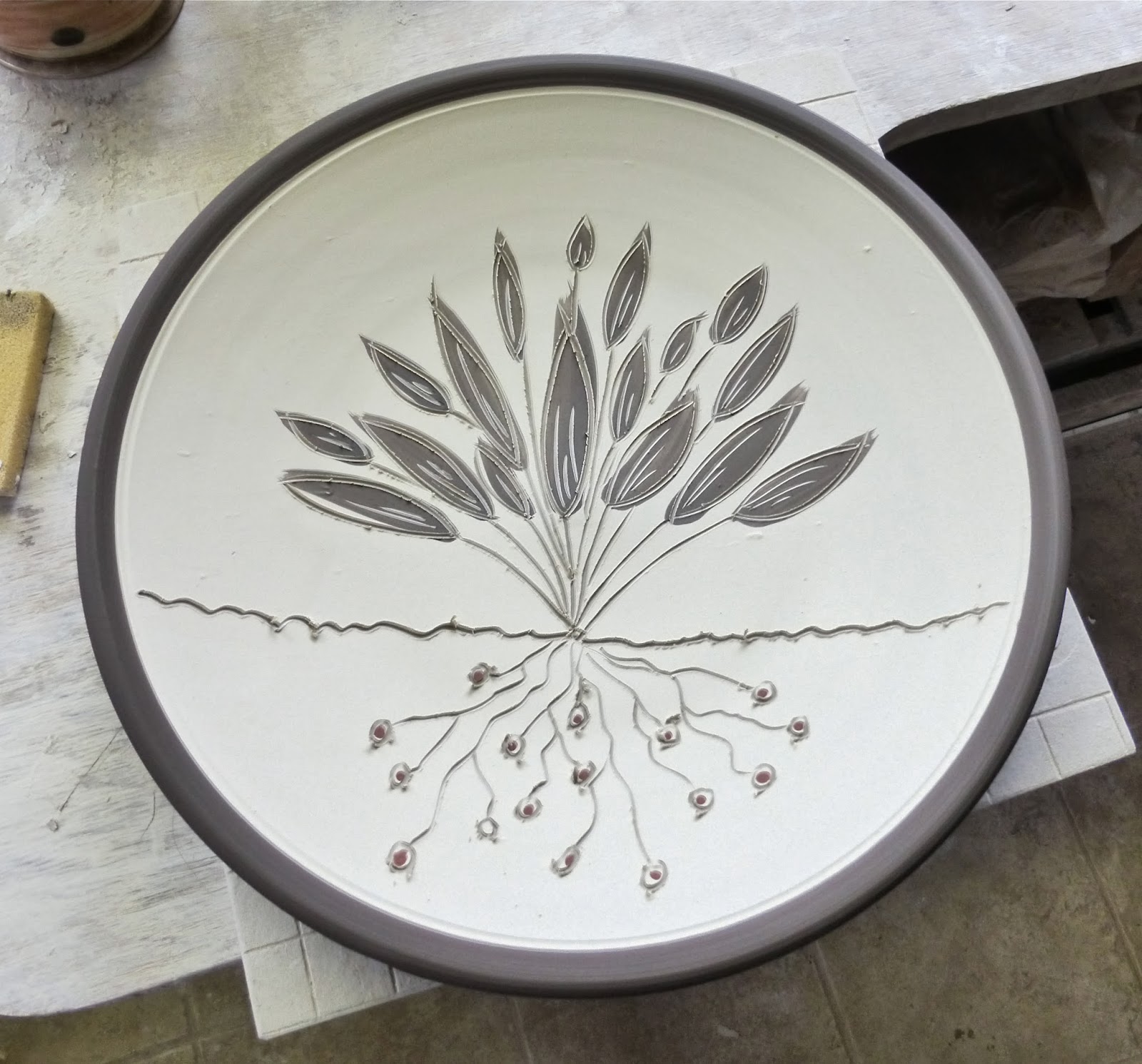 As is our custom, even when we get a big storm in Virginia it is a mixture of many different forms of H2O...It snowed and sleeted last night and in the morning we had a layer of heavy snow 7-8" deep which quickly began to melt as a gentle rain fell. Later it was raining, sleeting and snowing all at once and now it's returned to snow. After it freezes tonight it will be doubly treacherous tomorrow. That's the difference between winter in the north and winter in the south...ICE!
In case you've stayed to the end and you've wondered about the first photo...It is indeed titled "Bubba's First Christmas" and was part of a lengthy series of photos that I took along with my old friend Shannon. I found the doll on the edge of the Rappahannock River and he soon became the star of a whole series of adventures...he went cross country with a band of plastic comrades. maybe I'll dig them out one day. they always amused me.
Posted by Dan Finnegan at 5:35 PM

I am delighted to leave a comment if only to tell you I love the sgraffito work and the delicate plant forms... I look forward to seeing your online "shop" and adding something of yours to our humble collection. Many warm wishes from the great white North, Anne D in Saint-Sauveur, QC

Hi Dan, Sometimes I'll get more hits than I deserve and find they are coming from sites that are trying to spam me. They don't get in but the visits still count.If you report them blogger may block them.

It is good to read your voice. I hope to that you will come back and share with us often about how your life is going. I know I see it on FB but it is best sometimes done in "long hand"..... ps- I do not want a NY winter snow or cold- not one bit. :)

Yes, I imagine that all of us are spending more time on ye olde computer, these days. It's part of the hustle, but it's also how we keep in touch. It's always nice to hear from my blogging buddies and to see what we're all doing. I hope you get to do some sledding through your enchanted alphabet forest!

Great hearing you will have an online shop. Starting today I will be saving my pennies for a "bird". Love your work and the blog.

Saw you at Bob's last year but alas you are a popular guy :) Hoping to get there this year too as it was the best potters event I have attended in many years ...... and we camped at a state park! Always read your posts but always anxious to get out to the studio so don't always leave a post. Happy potting :)

First, that is one creepy little plastic baby! It reminds me of the year Walter Hyleck was playing with this Cupie Doll mold in the pottery studio at Berea, and there were all of these creepy baby faces everywhere! All nightmares aside, I am anticipating seeing your new site. I've gone back and forth about switching to Wordpress, and would like to know your thoughts when you get settled in the future. Love the new sgraffito work, too! Good luck with all of the upcoming opportunities!