The snow continues to be incredible and wonderful...we are approaching 50" total accumulation and it still sounds like there's more to come. I've been spending most of my time on the farm, which allows me to share my 4-wheel drive Jeep with Paul and Emily and Ellie AND to reach my studio instead of driving out from town. But that means a good 1/2 mile walk there and back through feet of snow, some of it falling furiously. Mixed with all that snow is a melted layer that has frozen and a layer of sleet as well...plenty of trees have lost big limbs or have come down altogether, mostly pines and magnolias and others that hold their leaves this time of year.  All through the woods are trees bent to the ground as if in supplication. It's magic. 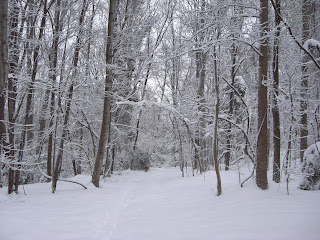 Yesterday was warm enough to start the big melt and the roofs are slowly shedding their icy blankets. Hanging 3 feet or more off the edge, it eventually breaks off in big lumps and chunks making a sound  more felt than heard. But before than it looks like a wave frozen in time. Just don't get caught underneath when it goes! 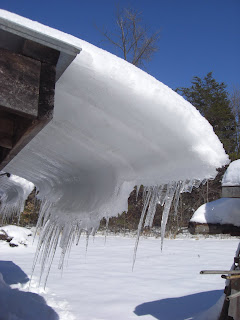 Once I get to the studio and warm it up I've been pretty productive, finishing a bunch of coin banks and nearing the end of the ovals I made earlier. I'm going a bit crazy on the little birds lately, which is not an unusual behavior for me. I'm trying to dream up a vehicle for a pot that would be covered with dozens and dozens of 'em. I can't help it, I'm a pottery binge-er. 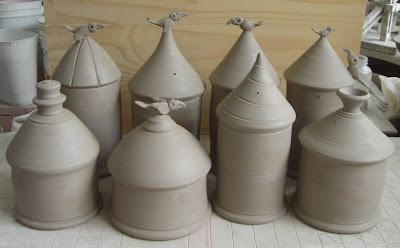 Who doesn't like those beautiful brown salt glazed silos? This bank turned into one with out much trouble at all. 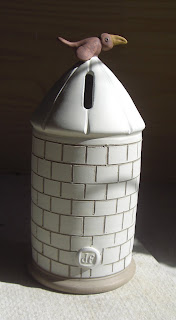 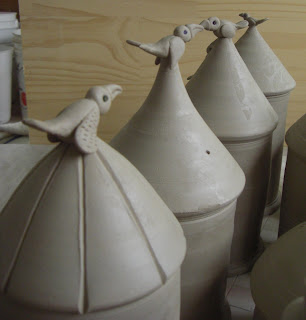 I showed you in an earlier blog my attempt to make a Kline-ish crock so as I was slipping it I decided I might as well carry on the game and try my hand with a little brushwork. I used some simple brushwork on my work for about 5 years in the early 1980's, applying an oxide mix over a neutral semi-matt gray glaze. I liked the simple use of shapes by the likes of David Leach and Nina Davis and Ray Finch. It felt forced and I eventually gave it up. The truth is, I've always had a strong sense of what form is right, but I've been all over the joint when it comes to surface. Anyway, it was fun to revisit. 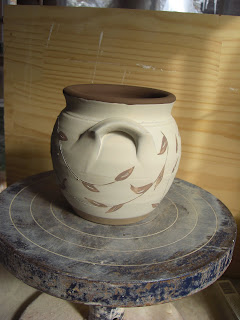 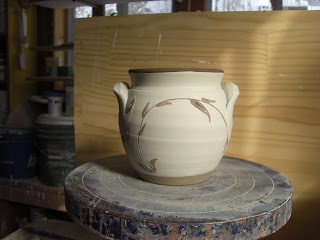 I see hints of Hannah and hints of Michael..?..and that is one HELL of an overhang of snow you've got there! Do you think we're done??

You guy's are quick, I hadn't even finished my post! Come back and read my pearls of wisdom!

The birds are great I could see more.
The handiwork on the crock is a nice and I think you should do more.
There is the point of how much and where to go with it.
More might make it feel more natural to you.
That is some dedication to get through the snow.
The unending winter.

pottery binging seems like the way to go... a good way to get through a lot of ideas. love the shot of the ice shelf coming off the roof, reminds me of my childhood.

Wow that's a lot of snow. It's great that you feel strong enough to hike through all that and spend a day in the studio.

Dan, Money boxes/banks are on my list of things to make this coming week. (Much inspired by Hannah and now you). Will you put a hole in the bottom for a cork/stopper? It seems folks definitely want that feature. I have had two banks w/out corks sitting in the showroom for months, no one will buy because they can't get their money out easily!! Ha. Hannah is dead set against putting the hole in the bottom. Such a traditionalist. Ha.

Wow! 50 inches! sounds like I need to send you my 8 hp Ariens snow blower! Better yet I had better get her tuned up for myself. If trends are to be trusted, seems like we should all count on more snow before April!

I'b better get the snow blower ready for action. (and the generator!)

I love the birds and the coin banks, and the brush work. I guess they (banks) are fair game to try myself, no? The potter's challenge!

The first photo of your pot with your brush strokes is poetic; it moves when I look at it and I like the feminine circular motion of the vines. Lovely.

I can here you you know Ron!