It's hard to believe that a week has gone by since H & D finished up their workshop at LibertyTown. We packed so much into one week that it's hard to digest. I'm sure that their heads must be ready to explode!
I met the gang (Ang included) in Cape Cod as their first workshop was winding down. After good-byes with Hollis and friends at the coffee shop we piled into my Jeep and headed for western Connecticut, a beautiful rural piece of Ol' New England that I know well from my younger days.
Our mission was to visit the pottery of Guy Wolffe, a well known maker of traditional earthenware pots and a great enthusiast for old pots...and old music as well. Sadly we only had a couple of hours to visit and poor Guy had so much to share with us that I'm sure he must have been spent by the time we left. This is a man who throws close to 30 tons(!) of clay a year! and plays a mean blues guitar...and banjo as well. He made 25 lb. pots for us, shared his collection of old pots, treated us to cold drinks, dusted off the guitar with a great old bluesy song and generally shared his enthusiasm for clay and his excitement at meeting his British 'cousins'.
We heard tales of Oprah and Martha and Dustin and Meryl...this is a potter who moves in different circles than many of us. Still it was great to meet him and I look forward to getting back there one day.
From Guy's place we then did a marathon trip to Virginia...a ten hour drive passed huge chunks of America, but what can you do? This is a big-ass country! I still had to show them my patch of God's green earth here...an hours drive west to  the Blue Ridge Mountains, an hour east to the Chesapeake Bay and one hour north to Washington, DC (our nation's capitol). We toured LibertyTown and my studio on the farm (we stayed in the grand old farmhouse there...thanks to Steve and Nicky) and spent a day in Washington, visiting the new native American Museum and The Freer Gallery of Asian Art (my favorite on the Mall). We visited Trista Chapman's studio back here in Fredericksburg and made burritos with Emily, Paul, Ellie, Jim, Elizabeth and Milo. Plus several visits to Carl's Ice Cream (the line last night was almost a half hour wait!), Parthenon Pizza and Sammy T's. And we even managed a cup of tea once in a great while...
We held a reception on Friday night and had a great turnout. A good deal of cash was exchanged for pots and by the end of the weekend there were just a few remaining. I was delighted to see people supporting this newest venture of ours. This is the first time we've hosted out of town artists for a workshop and we advertised both regionally and nationally and we are already muttering about next year's pottery workshop marathon. The response was very gratifying.
Of course you've probably seen lots of blog reports about the workshop itself. It was a fantastic few days and inspiring to many of us. It was really good idea I had. There have been so many good connections made and tales told and future plans hatched.
Within minutes of concluding a sublime workshop I whisked them off to the most ridiculous event I know (and I mean that in the best way possible!)...the 34th annual Virginia State Frisbee Championships. Friends of mine have been hosting this from the very beginning and it attracts some of the best frisbee players in the world. It is a totally zany, counterculture lovefest, held outdoors rain or shine in a local park. Hannah couldn't ever get her brain around it and as we left suggested that it might all have been a mirage! Of course, the moonshine she drank may have clouded her judgment. Both Hannah and Doug were indoctrinated/inducted into the Laszlo's Weenie World Family (if you don't know, don't ask...it's complicated...) which involves buying meaningless stock which requires the wearing of the pirate hat and wielding of the mighty sword...and the drinking of the 'shine...the 'clear' or the raspberry! I don't understand what struck Hannah as being so unusual??!! I hope that she will relate her take on this when she gets home. Don't pull any punches, Hannah! Tell it like you saw it! 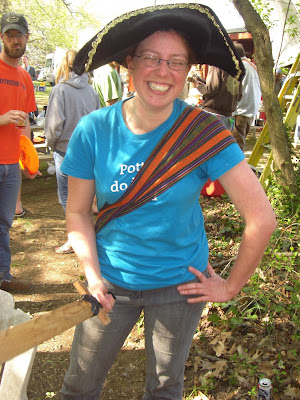 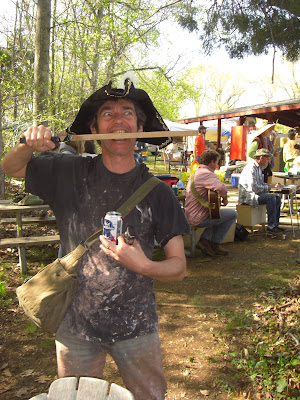 I think I've been putting off this recap because I don't really want to bring this adventure to an end. It was a couple of years ago that we first discussed the idea of the trip under the shade of the Milway's plum tree orchard in Gloucestershire, England. Now my mind is slowly turning towards my 10th firing coming up on the 17th/18th of May. I still have pots to make and lots of new bird ideas I won't get to this time. But that's always the way...
Posted by Dan Finnegan at 10:26 PM

Thanks for sharing. It was a fun weekend.Doug looks right at home in a pirate hat.

Yup, a great time. And I agree with Dennis, Doug looks eerily correct in the pirate get up....

I heard about that moonshine! We had a toast to you with tea, there is a photo on my blog if you missed it! From the way everyone talked they had a wonderful time with you. I am envious of the Guy Wolff visit, heard all about that too :)

Looks like you guys had great fun.
I'm listening to a track by Feeder called Moonshine at the moment.

I know how you feel about not wanting good times to end, but they do eventually. Sounds like you've had plenty of inspiration for when you get back in the studio!

Great write-up, Dan. From the small slice of the Days of Hannah and Doug that I saw and participated in, I can say it was a blast. It WAS a great idea you had--congratulations for pulling it off with such style!

Dan-YOU DID A GOOD -GOOD THING!
AND- We are all better for it.
Thank You!
Meredith

Thanks for a fantastic post! Having been at the last workshop in Shelby - and still basking in the wonder of it - it's great to see photos and read stories about the first leg of the great tour. It helps keep the wonderful experience alive just a little longer...

Thanks for the great workshop report. Fabulous planning for your first 'out of town' workshop. Excellent time had by all!