The early history of the pottery at Winchcombe is a bit murky, but it is generally accepted that there had been a pottery on the site for 100 years or so before Michael Cardew came along. Like most potteries of it's time it was located on a good seam of clay and had the added bonus of the River Isbourne running along the back of the property which made washing the impurities out of the clay much easier. The production at what was known then as the Greet Pottery were simple earthenware pots made for the local farms and dairies and at one time employed up to 10 men, who also produced brick and chimney pots.
The pottery had closed in 1914 and when Cardew left the pottery at St. Ives in 1926 he leased the old place for 50 pence a week and began to produce 'domestic ware', that is, pots for the kitchen and the table. Ray came along a few years later and joined the team that included Sidney Tustin and Elijah Comfort. Elijah was the one true link back to the the Greet Pottery (often called Beckett's)  as he had worked there for years until it closed. When it closed he went to 'work on the land' and when Michael arrived he hired him back as his principal thrower. Sidney was a young local lad who spent the next 51 years making a good deal of the smaller pieces while Elijah the bigger ones and Cardew anything that struck his fancy. Cardew was a restless soul and he eventually left for Cornwall and then Africa. Ray first managed the pottery for him and later he and his wife Muriel purchased the business and the pottery. Ray's constant presence and steady vision guided the pottery for more than 70 years and it was only this winter that he passed away. 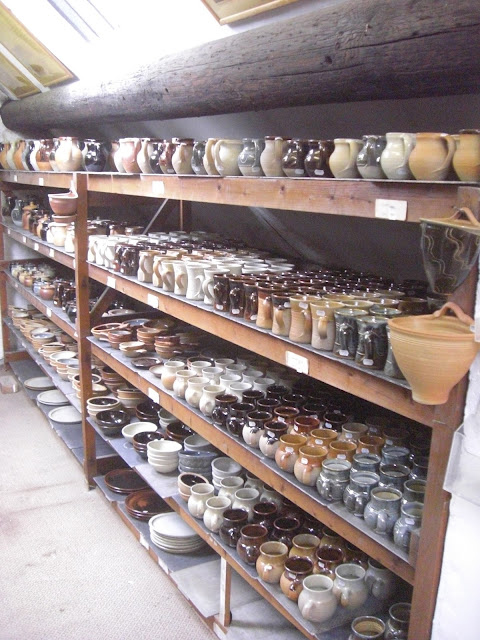 When I arrived at Winchcombe in 1978 you could purchase over 70 different items from the production line (referred to as standard ware) as well as many of the 'one -offs' that were mostly made by Ray. Cider jars and huge chargers, HWBs (hot water bottles with a threaded stopper) large, garden party sized teapots and lots of commissioned work as well. Many a new born child or newly wedded couple would have received a pot inscribed with names and dates written in his beautiful calligraphy. While I sit at the computer writing this the platter he gave to Toff and Georgie when they were married is on the wall above me. 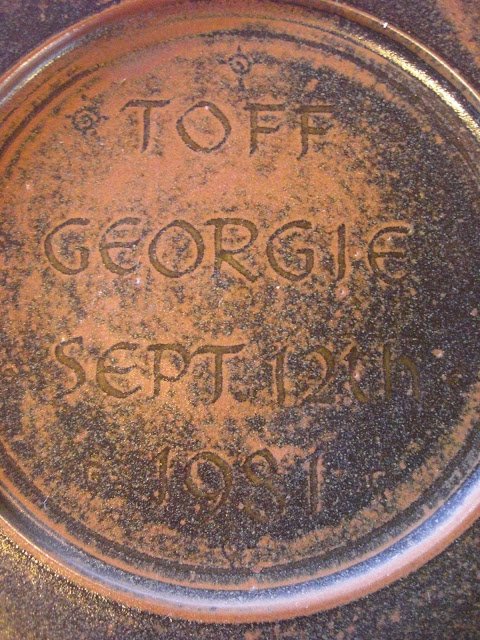 Each member of the team had their own areas of specialization and the work was designed to fit together and represent the pottery as a whole rather than as the work of individuals. With a few exceptions, everyone stamped their wares with the WP stamp... the English version of the unknown craftsman?! The most prolific potter at that time was Eddie Hopkins...I have a series of slides that I took as, over the course of a week he made, trimmed and handled 500 small mugs! They were beautifully thrown and when loading them in the biscuit kiln I would stack them 7 high. You can't imagine how uniform in height each of those stacks would be. I was forever in awe of this kind of skill and although I think I make a pretty good pot myself  I never could imagine attaining that level of ability.
On the lower rungs of the team ladder, Nori would make thousands of mini bowls and dishes which ended up at Crank's in London, a vegetarian restaurant that served everything in Winchcombe pots. Many of the pots intended for them were made to specific sizes to control the portions. At the height of a lunch-time rush there was always a staff member or two whose job it was to look out for people slipping a little pot or two into their pocket or handbag!
Cranks was conveniently located next to the Craft Potters shop on Marshall Street in London and it was there that Ray had a solo exhibition just as I was preparing to return to the US. He had the very first exhibition there when they first opened the doors in 1960 and this was to be a celebration of the shop's first 20 years. He had been putting aside the best pots from a couple of years worth of firings and when we arrived outside the gallery we discovered a queue of people stretching across the front window and around the corner! I've never seen anything like it. It really was a great time to be making pots and there was perhaps a greater appreciation then than now for handmade work. As the doors opened people rushed inside and in a short while every pot in the show had been red dotted. We were so pleased for Ray, because we had urged him to add a bit more to his prices (not an easy thing to do) and he was sure that they were too costly for anyone to buy.
I left England shortly after that and within a years' time I had made my way to Fredericksburg Virginia, where I have worked ever since. Maybe I'll find the time to write about those days, but I don't believe that I ever lived such a magical existence as I did in those two years, surrounded by the pastoral beauty of the Cotswold's, immersed in a great tradition of handcraft and befriended by some of the most interesting and welcoming people I've ever known. This my 30th visit to this island nation, and as long as they allow me, I will return again and again.

Thanks again for reading. We now return you to our regularly scheduled program...
Posted by Dan Finnegan at 7:21 AM

How fortunate that you were able to participate in such magical yet completely real time. Serendipity?

Thanks Dan. These posts were excellent.

I never knew it was "only" 2 years. Isn't it wonderful how such a short amount of time can totally change your life's direction? Thanks for the story Dan.

These stories have been great. I have been eagerly awaiting the next installment each day. Thanks for sharing.

Like a good book, a well written blog story should not end! Merci Dan.

Oh Dan! I had to save these for the long read. Wonderful, wonderful stories of your time in England.
It was an opportunity not missed. I have said it before, you are a lucky man with a rich and wondrous life.

I have really enjoyed reading about your pottery history in England. England is one of my favorite places on the planet but don't know much about its pottery; Thanks for educating me.