How to Know Which End Is Up?

A long time ago one of my art teachers suggested turning something I was working on upside down to look at it with fresh eyes. That lesson stuck and I often turn things this way and that to see if there is a new idea there. I attended a workshop with Paul Soldner way back when (1977!) and he was throwing these large closed forms then flipping them over and tearing an opening in what had been the foot! And Byron Temple often made his famous boxes in a similar fashion...turning an opening and a gallery in the bottom and then adding a thrown lid. Ideas stored up like that become part of a personal encyclopedia...
This group of vases have a foot thrown on them inspired by Khymer pottery that I have long admired. I like them up or down. 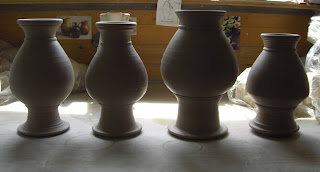 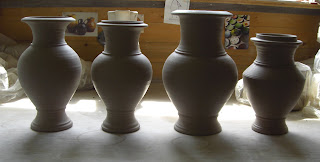 This is a bit of a 'classic' for me. Nice fat form with lobes and a strong but understated rim. A great form for a bunch of flowers.
' 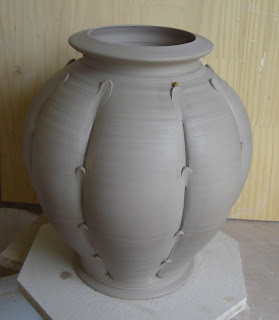 I made a quick 'sketch' in clay, trying to figure out how to make 'the Littlefield Crock'. I threw a bigger version today. 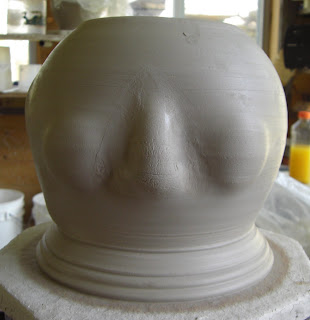 Speaking of that encyclopedia of ideas, this bird is inspired by a Cyclidic pot from the 7th. century B.C.  I've been looking at for years. My bird-mania has no bounds! 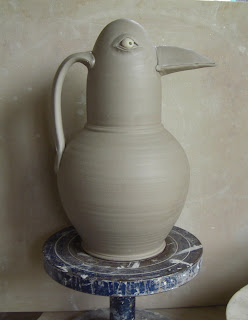 This is a drawing I did to help that memory...I like this rather dense sgrafitto decoration. It doesn't have to be feathers to suggest 'bird'. 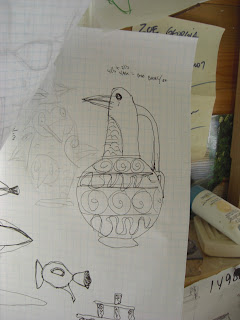 And finally, A nice shot of my stamp...my mark...my chop. Not to be confused with Doug Fitch! 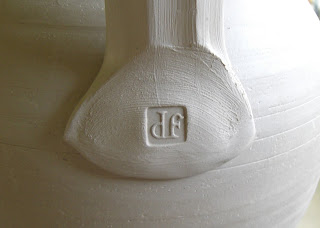 I like that bird-pot sooo much!!!
It made me smile and think of a bird in the Muppet Show, that tall Eagle-like blue one with the long neck (don't remember its name).
Thanks for making me smile at the start of my day!

you could change your chop to ndf
not doug finch.
I often turn pots over to see if there is another shape going on in there.
Sometimes it leads to something new.
I love that classical vase- fat and sweet.

Upside-down or not... they all look right side-up. Beautiful forms!

I usually turn pots over as they're drying since the think bottom usually dries slower than the rims.