For those of you who are paying attention, I will now tell you about yesterday's mystery.
A few days ago my assistant, Beth, mentioned that she had seen a big mouse or a small rat in the pottery studio at LibertyTown. Eventually, with the help of Stephanie's dad's Hav-a-hart trap, we caught him/her. I never got to see it until it was trapped, but it was apparently quite bold. It sucked the entire innards from 2 of Neal's clementines!
The dilemma when trapping a critter is where to release it and somewhere out in the woods would be as good a choice as any. So I put the trap in a crate and the crate in my Jeep and drove out to the studio. (What's really weird is that last summer I had a mouse that lived in my jeep for a few weeks and I'm pretty sure it went to Maine and back with me! But that's another story.)
I then walked to the top of the field and through the woods to release him, thinking I had completed my mission.
At the end of the day I put a few little 'dust catchers' on the handles of some pots and when I arrived the next day and uncovered them, they had been nibbled as you can see here. 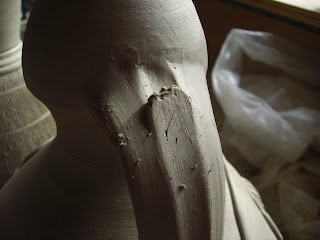 My first reaction was to blame the mice the reside in the studio but then I looked past the pots to a towel nearby and there was the RAT!!! And, alas, he had expired! I am still completely 'gobsmacked'. I can accept that it followed my scent back to the studio, although it was a long way. But I have no idea how it got into the studio, which I built myself and know well. And why did it just go for these little 'prunts' at the top of some 18" high pots covered in plastic? And then why did it die? I know that this photo might be a little bothersome, but this is how little Ratzo left this mortal coil and all he left behind are mysteries. The wonders of nature... 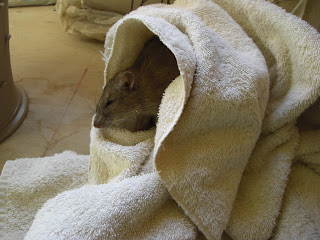 I would assume that consuming the wet clay would "clog" up the little (big?) guy/girl. Maybe that is the cause for expiration.

Interesting tidbit from the nature files.

That must be the kind of thing that happens when you work out in the wilderness. And maybe you need a resident studio cat.

I bet he was happy to have gone out for a ride- and yes, they will come back when you play catch and release with them. I have watched mice flatten themselves to nothing and go under a door.

Could they be roof rats? We have them in Metro Atlanta. I just paid $1200 to have screen put around the gaps in my house after I caught 6 in my attic (not in the hav-a-hart traps!) $1200 for 3 hours work--that's the business to be in! Check out verminators.com, or google roof rats.

Kathy asks if Miss Moneypenny knows about your exploits with Ratso...