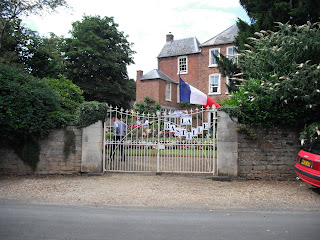 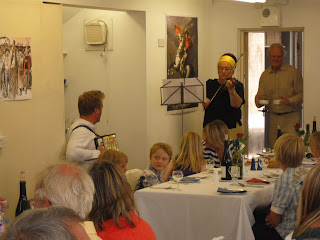 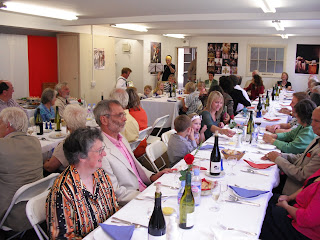 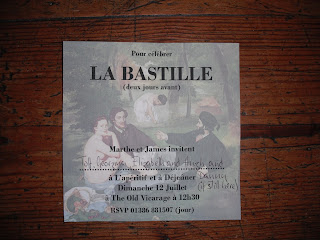 Today is officially Bastille Day, France's version of our Independence Day. I was fortunate to be invited on Sunday to Marthe and James Gardner's for 'a L'aperitif et 'a Dejeuner at their elegant home, The Old Vicarage, in the nearby village of Beckford. The afternoon began with champagne on the lawn and then was followed by a magnificent meal in the old print shop. They are the proprietors of Beckford Silk, a world class silk printing business, and we ate in the original studio. They have since moved to a much grander space.
Marthe has lived her entire adult life in England, but her French heritage hasn't been diminished a bit. She and her son Charles preceded the meal with a rousing version of La Marseillaise, played on violin and squeeze box. You might remember that great scene in Casablanca when the free French sing it to drown out the Germans in Rick's Cafe...it was much like that!
These folks know to live...and eat. After the meal there were 6 or more 'puddings' (that's desserts for you Americans) followed by cheeses, just in case there was an empty space to fill.
This was a almost a 4 hour affair and it is yet another reason that I love the life here in these country villages.
Posted by Dan Finnegan at 4:58 AM

How will you ever manage to live the mundane life again in Virginia?? I know you will fully enjoy the last 3 weeks!!

It's a tough life you lead there, Finnegan.