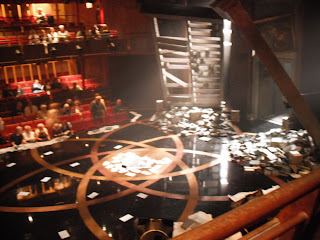 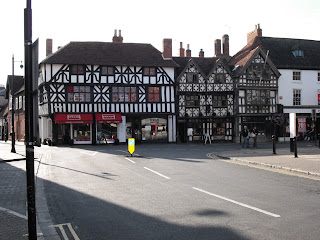 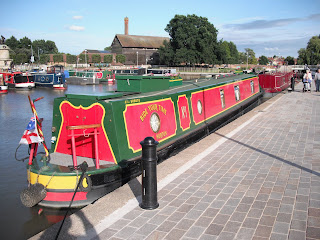 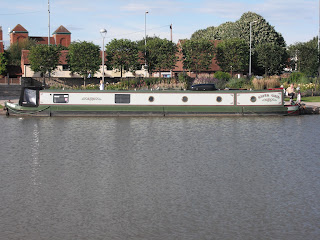 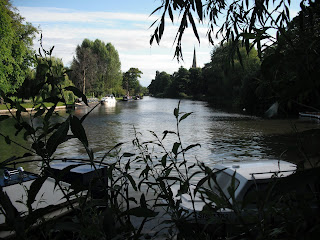 ...in the arts was theater and last night I treated myself to a production of The Winter's Tale at Stratford-on-Avon. It is one of Shakespeare's lesser plays for me as the tone is very strange. Dark and brooding in the first half and as light as a comedy after intermission.I have my Jesuit education to thank for introducing me to theater and it is always thrilling to be transported by beautiful language and performance. The staging perhaps outstripped the production this time, but it was still a wonderful evening. For some reason that is not in the text, books were the overarching decorative theme, with giant bookcases framing the stage that tipped out all the books to the floor at a particularly dramatic moment. They were rearranged in the second half to create the floor of a forest and during a dance piece the characters were all garbed in costumes made from pages of books. It was very effective. Sorry the photo is out of focus...I had to sneak a shot as it was forbidden!
The other photos are of Narrow Boats on the Avon...they are seen all over England on the canals and rivers.
Did my title grab you this time?
Posted by Dan Finnegan at 4:20 AM

What a fun evening! And how special to be in such a historic theater for it. I, myself, decorate with books, and they often please themselves by falling all over the floor at odd moments. I loved your description of their use in set design.

You are missed at Ltown, but we are doing fine and look forward to your return. Hal brought your rocking chair yesterday, and it is lovely! Keep well--Elizabeth

Stratford on Avon is a cool place. I was there when I was 14 and even at that disgruntled age I appreciated it!

Greetings Dan! I am finally coming up for air here in Catlett. Got your postcard -- it gave me a lift, thanks.

Sent Toff a message requesting a salt pig if you can fit it in your return luggage.

Mom sends her best to you and Toff.

Think I'm going sunday Dan. Be good to see you there if you manage it. When do you head home?
h