A Question of Balance

It is a rare occurrence that I drop a pot, let alone three. Yesterday was one of those rare ones. As much as I hate to admit it, it feels like putting a match to some money. Losing the effort, the time, the cash...it all bothers me. Now that I'm a Blogger, reactions are compounded....first it's "Damn#%&*%$"...then it's "I better get a photo of this" 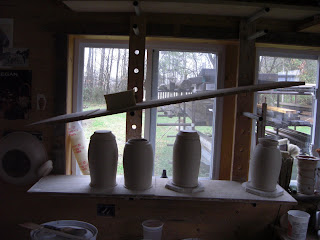 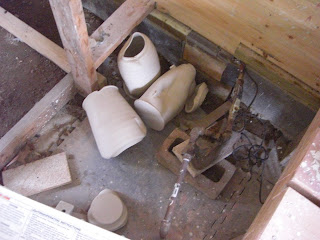 Other than wrecking pots, I had a good lunch with Bea, Paul and Rudi and then made another batch of planters, this time with a darker clay for the wood chamber. I do put holes in them, to answer Patricia's question. On big ones, I put several holes in the side instead of the bottom. Better drainage. 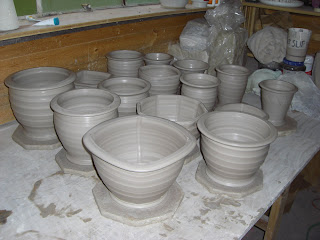 Extra credit for naming the band who's album title I stole for today's title!
Posted by Dan Finnegan at 9:29 AM

One of my favourite bands when I was many years younger!

Yes indeed, The Moody Blues! My first concert in 1971. I loved them and the Kinks back in the day.

Thanks for the answer regarding drainage holes... Sorry about the lost pots!